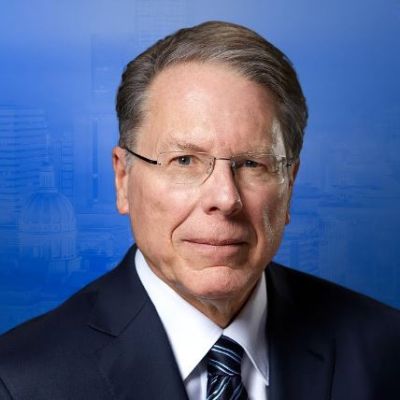 Wayne LaPierre became the world’s most recognizable face in gun rights advocacy after rising to the top administrative post at the NRF.

Wayne Robert LaPierre, Jr. is an American gun rights activist born November 8, 1949. He is presently the CEO and Executive Vice President of the National Rifle Association.

Wayne Robert LaPierre Jr. was the eldest child of Hazel (Gordon) and Wayne Robert LaPierre Sr. and was born in Schenectady, New York. Wayne’s father was an accountant at a nearby General Electric factory. His family can trace their patrilineal ancestry to a 17th-century French progenitor who moved from Brittany, France, to Quebec, Canada.

When Wayne, Jr. was five years old, his family relocated to Roanoke, Virginia, and he was raised in the Roman Catholic church. He had a draft number (097) in 1970, which put him in the category of “most likely to be drafted,” yet he was not drafted during the Vietnam War.

Before earning his Master’s degree in government politics, Wayne LaPierre worked as a government activist and lobbyist. He later served on the boards of directors of the National Fish and Wildlife Foundation, the American Conservative Union, and the American Association of Political Consultants.

He has served as the National Rifle Association’s Executive Vice President and Chief Executive Officer since 1991. (NRA). The National Rifle Association (NRA) is the most significant gun rights and small arms industry advocacy organization in the United States. After working as a legislative aide to Democratic Virginia delegate and gun rights supporter Vic Thomas, Wayne joined the NRA in 1977.

The NRA contributed $103 million, while Wayne was paid $985,885 in 2014. In 2015, the NRA contributed $95 million. In the same year, Wayne got a $3.7 million deferred pay dividend from his ’employee financed deferred compensation plan,’ as required by federal law, bringing Wayne’s total annual remuneration to $5,110,985, according to the NRA.

Former President George H.W. Bush was enraged when he received a letter stating that he had renounced his NRA life membership. In reaction to mounting criticism, Wayne was forced to apologize and say that he did not intend to “tar all federal law-enforcement officials with the same broad brush.”

Wayne LaPierre has worked hard to achieve his current position. He is complimented for his effort, but he is also chastised. In his career, he has failed to garner any honors or recognition.

Wayne LaPierre is married to Susan LaPierre, a successful fundraiser, and co-chair of the NRA’s Women’s Leadership Forum. She is most known as the wife of Wayne, a well-known American gun-rights activist.

Wayne LaPierre’s Salary and Net Worth

Wayne LaPierre is an American author and gun rights advocate who earns $985,000 a year. He is also the NRA’s executive vice president. Wayne LaPierre’s net worth as of January 2023 is $12 million. According to the most current Form 990 filing by the organization. His net worth is estimated to be substantial because he has worked for the NRA since 1977.