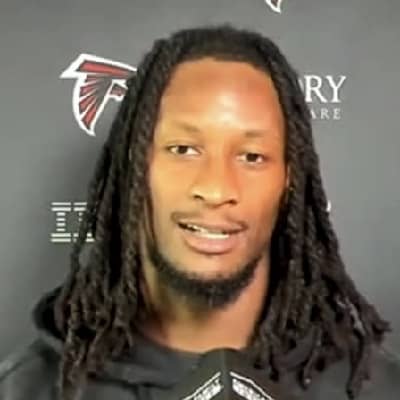 Todd Gurley was born on August 3, 1994, in Baltimore, Maryland, United States. Similarly, he is 27 years old. Todd Gerome Gurley and Darlene Simmons were his parents. Todd grew up with four brothers and sisters: Princeton, Davon, Shannon, and Tarik. There is no other information on Todd’s family because he is a private person. In Tarboro, North Carolina, he enrolled in Tarboro High School.

Todd stands 6 feet and 1 inch tall. He weighs 102 kilograms. Todd’s hair is black, and his eyes are also black.

Todd Gurley was the tenth overall pick in the first round of the 2015 NFL Draft. After Tim Worley in 1989, he was the highest-drafted running back from the University of Georgia. While he did not play, his rehabilitation got ahead of schedule, and he practiced without pads during the preseason.

He was cleared to play shortly after by the St. Louis medical team. On September 27, 2015, he made his NFL debut against the Pittsburgh Steelers in Week 3 of the 2015 season. In the loss, he came in slowly and had six rushes for nine yards. He scored his first touchdown against the Browns on October 25, 2015, during Week 7. Because of his record of 566 yards in his first four NFL starts, he became the most prolific rusher in his first four NFL tournaments.

Todd scored a touchdown and rushed for 48 yards in Week 15, making him the third rookie in Rams history to rush for 1,000 yards in a season. Todd also rushed for 85 yards on 19 carries in Week 16 against the Seattle Seahawks, becoming the second Rams rookie to rush for ten touchdowns and 1,000 yards. On December 22, 2015, he was also named to the 2016 Pro Bowl and the 2015 NFL All-Rookie Team.

Todd was one of five rookies chosen for the Pro Bowl. He was also named NFL Offensive Rookie of the Year and ranked 22nd among the league’s Top 100 Players in 2016.

On July 24, 2018, he signed a four-year, $60 million contract with the Rams, with $45 million guaranteed. Todd became the highest-paid running back in the NFL after signing the contract. In 2018, he was also named to his third Pro Bowl and first-team All-Pro team. Todd had been performing admirably before it was revealed on March 2, 2019, that he had arthritis in his left knee.

Following his injury, his performance dipped, and he fell to 29th in terms of running yards, despite being a leader in 2018 and fourth in 2017. Todd had 857 rushing yards and 12 rushing touchdowns in 2019, as well as 31 receptions for 207 yards and two receiving touchdowns.

Todd is currently unmarried. He was previously involved with Olivia Davison. Todd met Olivia and began dating her at the University of Georgia. The couple split up. Todd and Olivia have not revealed the reason for their breakup. There is no other information available about Todd’s previous relationship. Todd has a niece as well. He adores and cherishes his niece. Olivia and her mother own a company called Liv Lively.

Todd Gurley’s Salary and Net Worth

Todd spends a lot of time on social media. He has 1.6 million followers on his Instagram account, @tg4hunnid. His Twitter handle is @TG3II, and he has 710.4k followers. Todd Gurley also has a Facebook page with 146k followers. Todd usually posts about his travels, friends, and football.