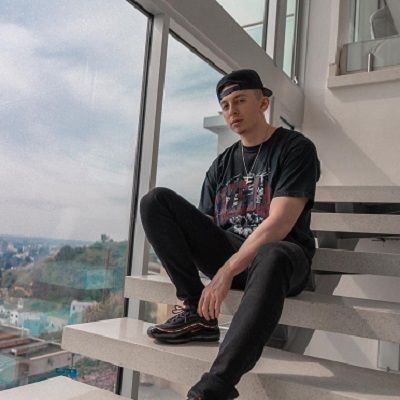 Tenser is 23 years old and was born on June 3rd, 1997. Brian is his real name, and he was born under the sign of Gemini. Brian, likewise, was born in Massachusetts, United States of America, and now resides in Los Angeles. He, too, is an American citizen who belongs to the Caucasian ethnic group and practices Christianity.

In terms of his personal history, no details about his family members or siblings has been made public. Brian, on the other hand, has posted photos of himself and his mother on his Instagram account. Similarly, he seems to be very loyal to his mother and enjoys spending time with her.

Brian has loved video games and sports since he was a boy. He also used to play a lot of video games like FORTNITE BATTLE ROYALE and CALL OF DUTY, as well as live stream games on Twitch. Furthermore, there is no information available about his professional qualifications or history.

Brian has loved playing online games since he was a child. Similarly, he quickly created a YouTube channel and began uploading the games he enjoys. Brian, likewise, entered Youtube on November 22, 2012 and created the channel ‘Tenser.’ Since then, he has gone online under the alias ‘Tenser.’ His channel’s main focus is on online games, and he makes hilarious Fortnite Battle Royale videos.

Brian’s first video was uploaded on May 25, 2013. His first video, titled ‘SoaR: TRICKSHOTTING FOR DUMMIES! – EPISODE 1 (CONSISTENCY),’ has received over 34 thousand views. On the 29th of May 2013, he posted another video titled ‘SoaR TENSER: SICK KILLCAM ON STANDOFF! UPDATE IN DESCRIPTION’.

Brian’s YouTube channel is also known for his gameplay and satirical sketch series. In addition, he joined the ‘Faze Clan’ in 2018. This is a Call of Duty gaming clan on YouTube that is part of an eSports organization. They’ve also played games like PlayerUnknown’s Battlegrounds, Counter-Strike: Global Offensive, FIFA, Overwatch, and Fortnite. Brian has a total of 1,088 videos on his website, which have received over 236 million views.

Similarly, his most famous video is ‘THIS NOG OPS ARMY KEPT STREAM SNIPINE ME..,’ which has received over 7.9 million views. I PUT TWITCH IN MY FORTNITE NAME AND THIRSTED EVERY KILL’, ‘I TRIED OUT FOR A FORTNITE CLAN THAT A FEW OF MY FANS MADE..’, ‘I RAN INTO THE MOST TOXIC KID EVER IN PLAYGROUND’, and ‘I PUT TWITCH IN MY FORTNITE NAME’ are among his most famous videos. These videos have received over 4.3 million views.

Similarly, his most recent upload was ‘I’M A TRYHARD,’ which he made on May 23, 2020. It has over 183k views as of right now. Brian also worked on his videos with other YouTube gamers. He’s still friends with Nudah, a YouTube gamer.

Brian is a Youtuber who makes the majority of his money from his website. He also has a net worth of $141,000 as of May 2020. Aside from that, no details about his asset value has been published in the media.

Brian’s relationship status is straight and he is in a relationship. He has not, however, revealed anything about his girlfriend in the media. On his Instagram account, Brian posted a photo with her.

Brian has a well-kept, safe, and fit physique. In terms of his physical appearance, he has fair skin, blue eyes, and light brown hair. However, no details about his body dimensions, such as height, weight, or vital statistics, is available.