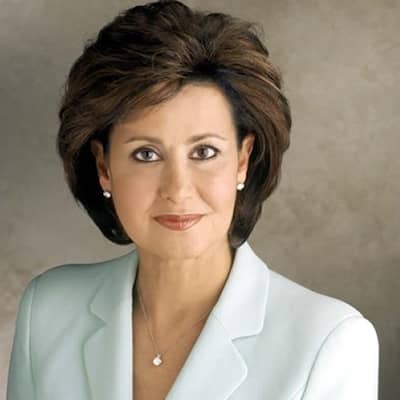 Susie Gharib was born in 1950 and is currently 72 years old. Unfortunately, her exact birth date is unknown. She is the fourth of four daughters of a Cleveland anesthesiologist. She is also of Iranian origin. Furthermore, one of her sisters is a Boston-based endocrinologist.

This woman stands 5 feet 4 inches tall and weighs around 66 kg. This personality has a distinct physical type and good body measurements. Susie has a healthy body weight that corresponds to her height. Her other bodily metrics are also not disclosed. This personality also features dark brown eyes and brown hair.

Susie joined Nightly Business Report in 1998, following a 20-year career with some of America’s most famous print and broadcast companies, such as NBC, CNBC, ESPN, and WABC-TV/New York. She began her career at Fortune magazine as a business journalist. She worked as a senior writer and associate editor there.

Similarly, she has worked as a correspondent for Newsweek, the Associated Press, and The Plain Dealer. In 1983, she transitioned from print to the then-new medium of television business reporting when she joined Business Times on ESPN. She also went by her married name, Susie Nazem, for a while during her career.

This personality also contributes to CNBC’s Nightly Business Report, a program she co-anchored for 16 years before leaving in December 2014. Sue Herera then took her place. Susie is well-known for her no-nonsense approach to interviewing corporate America’s top executives from Wall Street to Washington.

As a result, she has interviewed Bill Gates of Microsoft, Jeff Immelt of General Electric, Rex Tillerson of ExxonMobil, Warren Buffett of Berkshire Hathaway, Alan Mullaly of Ford, and Larry Fink of BlackRock, Jamie Dimon of J.P. Morgan, and many more. In addition, this journalist has been invited to the White House multiple times to interview Presidents Bill Clinton and George W. Bush.

She earned the Elliot V.Bell Award from the New York Financial Writers’ Association in 2012 for her outstanding contribution to financial journalism. Similarly, she received a Gracie Allen Award in 2013 for NBR’s feature on Harvard University’s first female president, Drew Gilpin Faust.

In addition, she had got a Gracie Award in 2001 as the finest anchorwoman of a major news program. She also received the Fulbright Award in 2012 for her contributions to global business knowledge, as well as the Newswoman’s Club of New York’s “Front Page Award” in 2007 and 2002.

Furthermore, she received the 2002 Front Page Award for an exceptional panel discussion with high-profile CEOs on how to rebuild investor trust in the aftermath of the Enron and WorldCom corporate crises. Similarly, the editors of TJFR, an industry newsletter, named her one of the nation’s 100 most prominent business writers.

This individual serves on the Case Western Reserve University Board of Trustees and the Columbia University School of International and Public Affairs Board of Advisors. In addition, she is a member of the Economic Club of New York.

Susie is a married lady when it comes to her personal life. As a result, she married Fred F. Nazem. Her husband, Fred, is a prominent businessman who is well-known in the corporate world in the United States. They have two children, Alexi, a son, and Taraneh, a daughter. Taraneh is a Fertility Specialist at Mount Sinai Medical Center in New York, while Alexi is the Founder/CEO of Nomad Health.

Throughout her professional career, this journalist has earned a lot of money. Susie’s net worth, on the other hand, is estimated to be approximately $4 million.