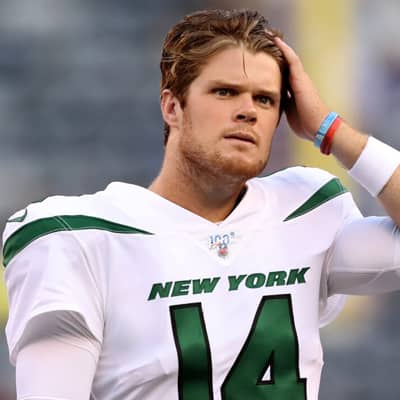 Samuel Richard Darnold, 24, was born on June 5, 1997, in Capistrano Beach, California, to Michael and Chris Darnold. According to his nationality, he is an American. Furthermore, Gemini is his zodiac sign. Franki Darnold, his younger sister, was his childhood companion.

Darnold, also, attended San Clemente High School in San Clemente, California, where he was a part of the football team. Samuel Richard Darnold attended the University of Southern California and played football for the Trojans after graduating from high school.

Darnold was selected third overall in the 2018 NFL Draft by the New York Jets, and on July 30, 2018, he signed a four-year contract with the Jets worth $30.25 million fully guaranteed, including a $20 million signing bonus.

He made his professional debut against the Atlanta Falcons on August 10th, throwing for 96 yards and a touchdown in the first preseason game.

Darnold made his regular-season debut against the Detroit Lions on September 10, 2018, passing for 198 yards and two touchdowns. In the Jets’ Week 2 season opener against the Miami Dolphins, Darnold passed for 334 yards, a touchdown, and two interceptions.

In Week 4 of the season, he threw for 167 yards and a score against the Jacksonville Jaguars. Against the Denver Broncos in Week 5, Darnold threw for 198 yards, three touchdowns, and an interception.

Against the Indianapolis Colts in Week 6, Darnold threw for 280 yards, two touchdowns, and an interception.

Samuel Richard Darnold is a multi-millionaire with a net worth of more than $20 million. He signed a four-year, $30.25 million contract with the New York Jets in 2018. The NFL franchise also earns an average of $20.56 million every year.

Sam Darnold has been dating Claire Kirksey since September 2017. They’ve been dating since they met at the University of Southern California. She is from Huntington Beach, California, and was a member of her high school’s softball team. During the game, Claire could be seen cheering on Sam Darnold.

On social media, Sam Darnold has also posted photos of himself and Claire. The couple’s relationship appears to be in good shape. They have not, however, exchanged wedding vows.

Samuel Richard Darnold is a world-class athlete who is also extremely attractive. The well-known NFL star is 6 feet 3 inches tall and weighs 102 kg.

In addition to being a well-known NFL quarterback, Samuel Richard Darnold is well-known on social media. He has 171k Instagram followers.