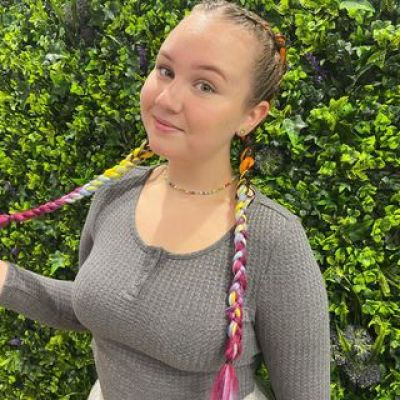 Ruby Rube is a British comedy vlogger with over 3.1 million subscribers on YouTube. Ruby Rube is well-known for her video series “At 3 A.M.”

Who is Ruby Rube? Ruby Rube is fifteen years old. She was born in England on January 16, 2006. Her zodiac sign is Capricorn. She was born to British parents whose names have not yet been revealed. She also has a younger sister named Bonnie. Growing up, she also had a dog named Lady. She has always enjoyed swimming since she was a child.

Similarly, she is of British nationality, but her ethnicity is unknown. Moving on to her educational background, she may be currently enrolled in school. Her school’s name, however, has not yet been revealed.

What is Ruby Rube’s Height? Ruby Rube, a lovely young lady, has a charming personality. She stands 5 feet 0 inches tall and weighs around 43 kg. Her hair is also blonde, and she has green eyes. However, her body size, height, and weight may fluctuate due to her age.

In terms of Ruby Rube’s professional life, she is a British YouTube star best known for her ‘3 AM’ comedy vlogs, which she posts on her eponymous YouTube channel. She began her YouTube career at a young age. Similarly, on December 21, 2015, she launched her self-titled YouTube channel. Her first video was simply titled “Introducing Ruby Rube.”

Ruby continues to post a variety of videos such as vlogs, pranks, challenges, Back to school, and many more. In addition, she has included her younger sister in the majority of her videos. Her videos appear to be very interesting and enjoyable, which has led to her rise to fame. Aside from that, she has opened her official merch store, where we can generally find phone cases, T-shirts, Hoodies, and many other items. She has also created her own Tiktok account, where she has amassed a large fan base through her creative posts.

On YouTube, all of these videos have millions of views. Her 3 a.m. challenge videos feature her going on adventures and describing everything she encounters. Ariana Grande is another of her favorite singers. Despite the fact that Ruby Rube has been posting videos on her YouTube channel since December 2015, she, like other YouTubers, struggled to gain subscribers at first. However, on November 26, 2016, she shared the video I MAILED MYSELF IN A BOX TO SANTA CLAUS AND IT WORKED!!. The video quickly went viral, and she has since received over 10 million views.

This catapulted her into an overnight YouTube sensation, and she began to gain more subscribers as a result. She capitalized on the video’s success by releasing I Mailed Myself BACK from the NORTH POLE in a BOX (Christmas Elves Came with Me) on November 30, 2016, which received over 2.7 million views. Ruby has since been posting videos based on the concept of mailing herself to fantastical people and her experiences during the adventures.

The videos established her as a fantastic vlogger, and she also began releasing her well-known 3.AM. challenge videos. The videos show her participating in pranks and challenges while narrating the entire experience in a humorous manner.

One Reddit writer expressed their thoughts on Ruby Rube and her videos. The individual believes Ruby obtained 1 million subscribers by using Click Bait and duping gullible children into believing ghosts and demons are after her. Furthermore, the videos are poorly produced, with editing that resembles one of those YouTube “Super Zero” videos. Ruby overreacts to everything, and she makes a lot of money doing so.

The DON’T SPIN YOUR FIDGET SPINNER AT 3 AM or BOSS BABY WANTS TO HACK MY CHANNEL videos are examples of a mix of poorly made and badly edited videos. Ruby mutes the sound of a hairdryer and spins the fidget spinner in the video. Ruby calls someone pretending to be boss baby on face time in the boss baby video and ends up beating the hell out of a doll.

The author also stated that Ruby does not love or care about her fans. Ruby’s only love is money, and whenever she does a fidget spinner giveaway, she says, “Please like the video and subscribe in addition to commenting.” In reality, Ruby does not reveal anything, making her an untrustworthy and liar vlogger.

Ruby Rube is mentioned by miraheze as a bad YouTuber. It’s because Ruby’s voice is annoying, similar to Barry’s voice in Bee Movie. Furthermore, Ruby, like Durv, N&A productions, and Elisocray, creates clickbait videos. In addition, despite violating the community guidelines, Ruby got away with her content. She also makes the same type of videos over and over, which is not creative.

Ruby came across a poster with “Baldi’s number” on it in her Baldi video, but if you look closely, it just shows that Ruby took a screenshot and typed in some random guy’s number. Ruby’s voice impressions are terrible and don’t even sound like the character’s voice. Baldi sounds like a fat guy, while Granny sounds like a real grandmother despite the fact that she’s a zombie.

She used to just make “Mailing Herself” videos, then “Calling People” videos, and finally “3 AM Videos,” which is the worst of all. Furthermore, Ruby disables comments on her videos, demonstrating that the young YouTuber is sensitive to criticism.

Ruby Rube’s Income And Net Worth

How much is Ruby Rube’s Income? Ruby Rube has been able to earn a good living through her YouTube videos at such a young age. Despite the fact that she has not disclosed her official earnings or estimated net worth. However, according to some online resources, her net worth is estimated to be around $1.4 million. She is, however, living a lavish lifestyle thanks to her good source of income at such a young age.

Who is Ruby Rube’s Boyfriend? In terms of Ruby Rube’s current relationship status, she may be single. She is, however, too young to marry now, and neither of them has children. She is currently preoccupied with her career. However, she may be linked with her ideal match in the future. Similarly, she is very close to her younger sister, with whom she shares a very special bond. Furthermore, she has kept a clean profile and has not been involved in any scandals.