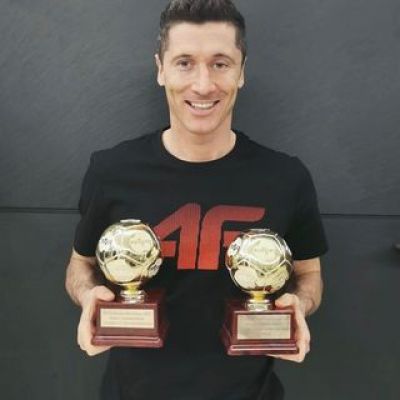 Robert Lewandowski is a professional footballer from Poland who began his career in 1996. His junior career lasted from 1996 to 2004 and his senior career began in 2005. He is also well-known for his involvement with the Bayern Munich football club and the Polish national team. He is also the captain of the Polish national team. He made his international debut for the senior Poland national team when he was 20 years old. More importantly, he is Poland’s all-time leading scorer, with 55 goals in 90 appearances. He is currently known as one of the generation’s most prolific goal scorers. In 2015, the Guardian ranked him as the fifth-best footballer on the planet. This well-known footballer has also won the award of Polish Player of the Year seven times.

What is Robert Lewandowski’s Height? He also has an athletic physique. He is 6 foot and half inches tall (184 cm/1.84m) and weighs 80 kilograms (176lbs). In addition, he has gray-colored eyes and black hair.

This well-known Polish footballer maintains active social media accounts with a sizable fan base. His Instagram handle (_rl9) has 20.3 million followers, and he has 1.4 million followers on Twitter (@lewy official). His official Facebook page, meanwhile, has 16 million followers.

Robert joined the Delta Warsaw in 2005 after playing for MKS during his youth. He made seventeen appearances and scored four goals in total. He also joined Legia Warsaw II for the 2005-2006 season, where he appeared in twelve games and scored two goals. From 2006 to 2008, he was a member of Znicz Pruszkow, where he scored 36 goals. He also achieved the status of becoming the highest scorer in the Polish third and second divisions. He joined the Lech Poznan football team in June 2008.

He made his Lech debut in the first round of the UEFA Cup, and he was the only one to score, demonstrating his quality. During that season, he appeared in 42 matches and scored 18 goals. Similarly, he had a strong season the following year, scoring 18 goals. In addition, he led his team to the 2009-2010 season championship.

In June 2010, Robert Lewandowski signed a four-year deal with Borussia Dortmund. In September, he scored his first goal for this team against Schalke 04 in a match. He guided his team to several victories in the 2011-12 season. In a 2-0 victory over SV Sandhausen, he also scored two goals. In addition, his outstanding results earned him the award of Best Player of the Year in Poland. With 22 goals, he became the third-highest scorer in the league. Similarly, he did exceptionally well in the following season. Robert was instrumental in his team’s 2-1 win over Werder Bremen. He was also one of the first players to score four goals against Real Madrid in a Champions League semi-final. However, they were defeated 2-1 by Bayern Munich in the final. He also returned to Dortmund for another season, becoming the Bundesliga’s top scorer. He played in 131 games for Borussia Dortmund, scoring 74 goals in the process.

For the 2014-2015 season, Robert signed a five-year deal with Bayern Munich. Dortmund had a rivalry with this team. He was defeated 2-0 by Dortmund in his debut match. He continued to play well for the rest of the season, appearing in 49 games and scoring 25 goals. Similarly, he set a record by scoring five goals in nine minutes during the 2015-16 season. Guinness World Records awarded him four certificates for scoring the fastest goal in any major European football league. In addition, he scored 42 goals in 51 games this season. He became a top goalscorer the following season, finishing among the Bundesliga’s top ten scorers. He scored 42 goals in 47 games during the season.

In addition, in the 2018-2019 season, he became the third-fastest player in the Champions League to reach 50 goals. In addition, he scored 40 goals in 47 games this season. He made his second-season debut against Energie Cottbus, where he scored his first goal. They won the match by a score of 3-1. He also extended his deal with Bayern until 2023 during the same season. He is currently preparing for the 2020-2021 season. He also became the first Polish player to win the ‘Best FIFA Men’s Player Award 2020′ on December 17, 2020, breaking Cristiano Ronaldo and Lionel Messi’s record of winning the award.

In September 2008, Robert made his senior national team debut. In a match against San Marino, he came on as a substitute and scored a goal to help his team win 2-0. Their team was able to qualify for the 2010 FIFA World Cup as a result of this. He also represented UEFA at Euro 2012, where he was voted Man of the Match in his first match. He was also a member of the UEFA Euro 2016 and 2018 World Cup qualifying teams.

Robert Lewandowski’s Income And Net Worth