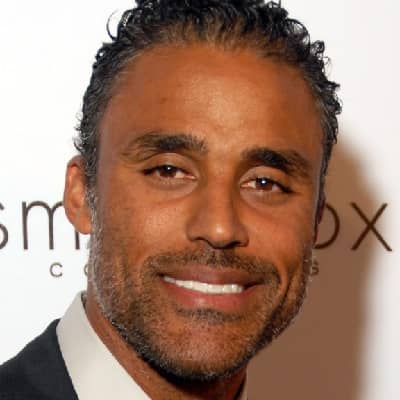 Rick Fox was born on July 24, 1969, as Ulrich Alexander Fox. In Toronto, Ontario, Canada, he entered this world. He is presently 52 years old and of Canadian/Bahamian nationality. In addition, he is a Christian, and his zodiac sign is Leo.

In terms of his family, he was born to his father Ulrich Fox, and his mother Dianne Gerace. His mother is an Olympic high jumper as well as a female pentathlete. Likewise, his father was a Bahamian, while his mother was of Italian and Scottish ancestry. Rick’s family relocated to the Bahamas when he was a child. Similarly, he has a sister, Jeanene Fox, and a brother, Aaron Fox.

He attended Kingsway Academy for his educational needs. He was a member of the “Saints,” a high school basketball team. In addition, he played basketball in Indiana. Moving on, he enrolled at and graduated from the University of North Carolina.

Rick is a gorgeous guy who has kept a fit body as an athlete, enhancing his body dimensions. In terms of height and weight, he stands 6 feet 7 inches or 2.01 meters tall and weighs around 104 kg or 230 pounds. Similarly, he has dark brown hair and the same color eyes.

Rick Fox began his professional basketball career after the Boston Celtics selected him 24th overall in the first round of the 1991 NBA draft. As a member of the Celtics, he was named to the NBA All-Rookie Second Team in 1992. In the same year, he was released by the Celtics and signed with the Los Angeles Lakers. After the 2003–04 season, Fox was traded back to the Celtics, but he chose to retire instead. Fox also represented Canada on the international level twice, once at the FIBA World Championships in 1990 and again in 1994.

Moving on, he starred in the 1994 film “Blue Chips” as a member of the Texas Western basketball team. He played Terry Hastings in the film “Eddie” two years later. Fox then played the ladies’ man Chick Deagan in the 1998 film “He Got Game.” However, he earned the most important job of his early acting career in 1997. He played Jackson Vahue, a jail inmate, in HBO’s prison drama Oz.

Fox has also appeared in “To Your Health” episodes. He was in Resurrection, 1-800-Missing, the Crime Wave/Odd Ball episode of Nickelodeon’s The Fairly OddParents, and Street Time. Similarly, in the film Holes, Fox portrayed baseball star Clyde ‘Sweetfeet’ Livingston. In 2005, Fox featured as a guest star in Kevin Hill as Stephen Melbourne. He also appeared in Love, Inc. the same year. He starred in Mini’s First Time and One Tree Hill in 2006. In 2007, he appeared in Ugly Betty.

In addition, he had recurring roles in “The Game” in 2008 and 2009. In 2009, Fox featured in the films Party Down and Head Case. Fox appeared in a cameo on Dollhouse and was booked in a recurring role on a Melrose Place revival. He made an appearance in The Big Bang Theory episode The Love Car Displacement in 2011.

Similarly, Fox appeared in five videos with Jake and Amir from CollegeHumor, including Body of Proof, Franklin & Bash, Single Ladies, and Mr. Box Office. He also appeared in the movies Hit the Floor, Mom, and The McCarthys. In 2015, Fox starred in three films: Sin City Saints, Sharknado 3: Oh Hell No!, and iZombie. He also stars in the 2016 film Shameless and has appeared on other reality television shows. Fox is a businessman as well as an E-Sports aficionado.

Rick’s basketball career has netted him a sizable fortune. He has an estimated net worth of $18 million US dollars as of 2022.

Rick Fox is a divorcee who is now single. Vanessa Williams, an actress, and singer was his wife. After eloping in the Caribbean in the summer of 1999, they married again in September 1999 in New York City. Their daughter, Sasha, was born in May of 2000.

After photographs of Fox kissing and holding another lady were published in The National Enquirer in mid-2004, Fox’s representative announced that the marriage was “on the brink of divorce.” Fox divorced Williams a few months later, in August 2004. The split between Fox and Williams, on the other hand, was amicable enough for the two to reconvene onscreen some years later on the television comedy Ugly Betty.

Rick is well-liked by them when it comes to his social media presence. He has over 418k Facebook followers, over 155k Instagram followers, and over 268k Twitter followers. On all of them, he is a confirmed user.