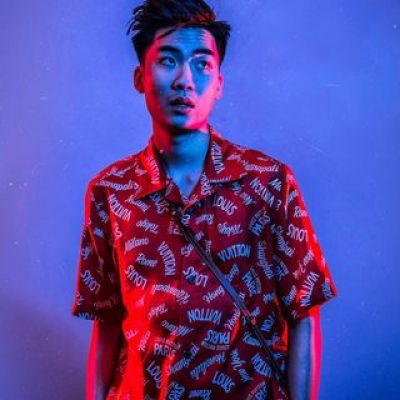 RiceGum is a YouTuber, online gamer, and rapper from the United States. RiceGum is also well-known for his divisive posts, video gameplays, and roasts of other young Youtubers, among other notable accomplishments.

Who is RiceGum? RiceGum is 23 years old and was born on November 19, 1996. Bryan Quang Le is his real name, but he is better known by his stage name, RiceGum. His hometown is Las Vegas, Nevada. His parents are both immigrants, with his father Luat Quang Le hailing from Vietnam and his mother Quang Ly Lely hailing from China.

Moving on, he has a number of videos on YouTube in which he describes his parents as loving and caring. To stop his family from being subjected to lewd remarks from other YouTubers, he keeps his personal and professional lives apart. After that, he went to Sierra Vista High School. He was a member of the basketball team there. RiceGum then enrolled at the University of Nevada, Las Vegas (UNLV), but dropped out after his first year to focus solely on his online business.

Furthermore, despite his mother’s wishes for him to become a doctor, he chose to pursue an internet career. RiceGum claims in many video posts that living with parents is advantageous because it eliminates the need to pay rent. RiceGum, on the other hand, claimed in one of his videos from January 2017 that he is considering moving to his own place and shared some of his favorite houses and neighborhoods.

What is RiceGum’s Height? RiceGum stands 6’1′′ tall and weighs approximately 70 kg. His other body measurements, such as chest-waist-hip, biceps, dress size, shoe size, and so on, are still being checked. Despite this, he has dark brown eyes and dark brown hair, which he dyes in various shades such as green, white, and purple, among others.

RiceGum released a single called It’s Every Night Sis in 2017 with Alissa Violet, another YouTube personality. It was an answer track to YouTuber Jake Paul’s viral song t’s Everyday Bro, which was certified Platinum by the Recording Industry Association of America. This was also his first charting single, reaching No. 80 on the Billboard Hot 100.

Furthermore, RiceGum released God Church in July 2017 as a follow-up to this song. Its title is a play on It’s Everyday Bro, and it debuted at the top of the Comedy Digital Track Sales list. RiceGum was also featured in YouTube personality and rapper KSI’s video for Earthquake. On August 12, 2017, they released the single. Furthermore, before being set to private, the video had amassed over 39 million views.

RiceGum first made an appearance in a Super Bowl LII advert for Monster headphones. He plays a man on the subway who is inspired by Iggy Azalea to create a headset from the ground up, which is approved by an executive in this commercial. RiceGum’s main channel is also the 481st most subscribed channel on YouTube as of January 2020. He is a regular collaborator with FaZe Banks and lives in the California FaZe Clan home.

RiceGum is also a social media celebrity who began his career as an online gamer. He is best known for playing Call of Duty in front of a live audience on social media. He also started his own video blogging accounts on multiple social media sites, where he quickly gained a following for his witty trolling and candid remarks about celebrities.

RiceGum then began posting videos, diss songs, and slideshows to roast famous web celebrities under his stage name rather than his real name in October 2012. He then became extremely famous after releasing the video These Kids Must Be Stopped, in which he roasted teenage internet stars, claiming that their acts were inappropriate for their age. With a large number of comments and subscribers, this video quickly went viral.

Furthermore, he posted this video on December 8, 2015. Jacob Sartorius, Hunter Rowland, and Loren Beech were the three young web stars. He chastised these teens and children in this video for sharing sexually suggestive dance and music videos. He also acted out how his mother would respond if he did such things, implying that he is judging the parenting of these child celebrities. The video’s popularity spawned a series that went viral on social media. These videos elicited a wide range of reactions and opinions from his followers, boosting his popularity.

He now creates diss tracks to roast teen web stars and YouTubers who have roasted him in their video blogs. I Mailed Myself in a Box and It Worked, Baby Ariel Roast Me (Diss Track), Jesse from Prank VS Prank, and Milonakis Roast Me are some of his most famous videos (Diss Track).

RiceGum, like every other adolescent, enjoyed playing video games. RiceGum began uploading game-plays of “Call of Duty” while also talking about himself on his videos after establishing his own YouTube and Twitter accounts in his early teens. The Mw3 Gameplay “Lifestory: BabySitting: Ricegum” was RiceGum’s first video upload.

He then formed a relationship with Machinima in November 2012. It’s a YouTube gaming network that spans the globe. At the age of 18, he also worked on a Twitch stream with Mia Khalifa. In 2015, he changed gears and started concentrating on comedy. He also made comedy and stunt videos, one of which featured him sealing himself inside a box and mailing himself to California.

RiceGum has been related to a number of debates. One of them was when Ian Carter of the YouTube channel iDubbbzTV created a RiceGum episode of his famous “Content Cop” series. It’s part of a series in which he criticizes the material of other YouTubers, and this particular video has over 47 million views and over 2 million likes. The diss track Asian Jake Paul was featured at the end of the video.

RiceGum made the diss track Frick da Police in response to the video. This diss track was met with a hostile response, with 1.3 million dislikes as of January 2020. This places it as the platform’s 40th most hated video. RiceGum has also had run-ins with other well-known YouTubers and artists, including James Rallison, Gabbie Hanna, and Bhad Bhabie.

RiceGum had specifically roasted Alabama Parker, a 10-year-old singer. She is the daughter of Travis Parker, a musician. In his video, RiceGum roasted her, saying her acts were unacceptable for her age and harshly criticizing her upbringing and lifestyle. Her father and stepmother immediately responded by having the video taken down from YouTube.

RiceGum has recently teamed up with Gabbi Hanna, another video blogger. RiceGum allegedly assaulted Gabbi and smashed her smartphone, according to Gabbi’s video. RiceGum also inflicted wounds on her, which she recorded on Snapchat. Surprisingly, this resulted in an increase in her subscribers and a decline in RiceGum’s followers.

RiceGum later admitted that he threw away the handset, but the wounds were simply stretch marks. Viewers also complained that he should have handled the situation more diplomatically and that he was too caustic. Despite the fact that she has not filed a lawsuit, she has requested compensation for her cellphone. Furthermore, Twitch banned him after one of his videos featured a BB Gun.

RiceGum posted a video of himself in Hong Kong on his main YouTube channel on June 12, 2018. In the video, he asks strangers and a McDonald’s employee if they have dogs on the menu because he claims that Asians in China eat cats and dogs. He also jokes about having to eat dog and cat meat because he is “still free to new experiences.” RiceGum questions whether the beef entrails in Hong Kong street food are dog meat and says “shit looks gross.”

He recorded comedian M2THAK approaching a man in the Hong Kong International Airport and shouting, “Do you understand the words that are coming out of my mouth?” to suggest that Asian communities do not understand English, allegedly imitating a scene from the Hollywood film Rush Hour starring Jackie Chan and Chris Tucker.

M2THAK was also caught on camera repositioning mannequins in a shop window into sexually provocative poses, according to RiceGum. A scene in the video featured them giving a local Hong Kong man half-eaten ice cream. The video has been compared to Logan Paul’s controversial Japan vlog and critics have pointed out that he is being arrogant and culturally insensitive in a foreign nation.

RiceGum’s videos are now “disrespectful, ignorant, borderline racist, & shameful to all creators, particularly Asians,” according to Jimmy Wong, who asked him to “please grow up & stop.” RiceGum released a video two weeks later, on June 26, after the video drew a backlash in China and other Asian countries, claiming that he was only “joking around.”

RiceGum defended himself, claiming that he was just trying to make a point about American comedy culture by using Asian stereotypes and that people were being too sensitive. He went on to say that because he is Asian, he believes it is appropriate. He also expressed a desire to return to Hong Kong, but added that he is “sort of scared now” because “people may hit and beat me up.”

Also, however, criticized the video as being insincere. His apology seemed to be delivered in a “somewhat glib way,” according to Polygon, and the “apology” “sounded incredibly forced,” according to What’s Trending. Owing to a breach of YouTube’s Terms of Service, the video of his Hong Kong tour was taken down.

Promotional page for the mystery box

RiceGum and Jake Paul were chastised in January 2019 for endorsing MysteryBrand. It’s a website that lets you open a digital “mystery box” filled with pre-selected pieces. It was part of a deal that included the chance to win a mystery box in real life. Many users have complained that they have not earned prizes they won on the web, leading them to believe it is a scam.

“No one said something because it wasn’t a big deal at the time. Why didn’t anyone mention it, or even bring it up? This mystery box thing has been around for 3 or 4 months, also from other developers, but it’s a challenge as soon as I do it?”

Who is RiceGum’s Girlfriend? RiceGum is currently single. In the past, he had a confirmed relationship with model Abby Rao. He was also linked to Alissa Violet, FaZe Banks, and Sommer Ray, according to reports. The public chastised him and model Sommer Ray for fabricating their relationship in order to gain more followers, attraction, and fame.

RiceGumt currently has over 10.6 million YouTube subscribers and 4.1 million Instagram followers. In the same way, he joined Twitter in October 2012 and now has 2.8 million followers. On September 24, 2012, he launched his self-titled YouTube channel, which has received 2,093,206,125 views to date. RiceGum has 783k Facebook followers and has posted 98 videos on Instagram. On all of the social media sites listed above, he is a verified user.

RiceGum’s Income And Net Worth

How much is RiceGum’s Income? RiceGum’s net worth is estimated to be around $8 million dollars. Youtube and his discography, among other professional endeavors, are his primary sources of revenue.