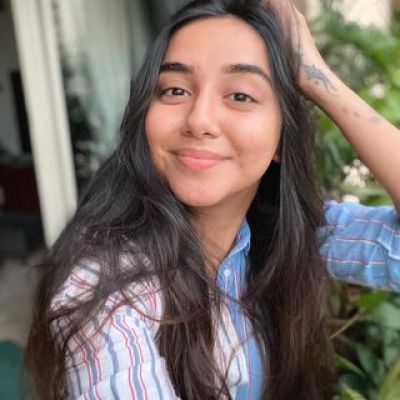 Who is Prajakta Koli? Prajakta Koli was born on the 27th of June 1993 in Mumbai, Maharashtra, India. Koli is an Indian native who practices the Hindu religion. Similarly, the Indian YouTuber will be 28 years old in 2021, and her zodiac sign is Gemini. Prajakta Koli was raised in Thane after arriving on this planet.

Prajakta Koli adored listening to the radio as a child, so when she was in sixth grade, she decided to become a radio DJ. Prajakta Koli has a close relationship with her parents. Prajakta Koli’s father is a real estate developer who is now a restaurateur, and her mother is a phonetics and language instructor. Prajakta Koli participated in various debates and elocutions as a student.

She attended Vasant Vihar High School in Thane for her education. Koli then attended the V. G. Vaze College of Arts, Science, and Commerce in Mulund, as well as the University of Mumbai. Prajakta Koli went on to earn a Bachelor of Mass Media degree.

Prajakta Koli began her career as an intern at Mumbai’s Fever 104 FM radio station. Unfortunately, Prajakta Koli was not as pleased with her work as she had hoped. Koli got her first show, “Call Centre,” at midnight every day after working as an intern for a year. However, the show was a failure, and she left her job. Koli met Sudeep Lahiri, who subsequently became the vice-president of One Digital Entertainment while interning.

Sudeep Lahiri inspired Koli to start her own YouTube comedy channel, which she did in February 2015. Prajakta has also worked with Bollywood celebs such as Nawazuddin Siddiqui, Kareena Kapoor Khan, and Vicky Kaushal. Koli attended the “YouTube FanFest” in 2018, which was held in Delhi and Mumbai in 2019. In December 2018, she also recorded a national television commercial for WhatsApp.

This contracts with the anticipation of propaganda and providing misleading updates over the chat app. Koli was named to the Forbes list of 30 under 30 and the Entrepreneur India list of 35 under 35 in February 2019, as well as the Outlook Business Magazine list of Women of Worth. She also won the Cosmopolitan YouTuber of the Year award. Koli appeared on the annual “Cool list” of the talking magazine Grazia India in January 2020.

Similarly, she appeared on the cover of the magazine BW Businessworld in April 2020 as part of their list of the Most Influential Women. Prajakta then announced the return of her YouTube Originals show “Pretty Fit” in 2020, in which she interviews celebrities such as Kareena Kapoor, Neha Kakkar, Sanya Malhotra, RJ Malishka, Mithila Palkar, and Sumukhi Suresh. In addition to the interviews, the stars had to do some of the duties.

The first episode of the same show was released on January 21st. She then released a short film, “Khayali Pulao,” in July 2020, on female empowerment in rural Haryana. Koli was the lead actress in the Netflix series “Mismatched” in November 2020. Prajakta will thereafter appear in Dharma Productions’ film “Jug Jugg Jeeyo.” Aside from her YouTube career, she founded the #iPledgeToBeMe initiative for World Mental Health Day in 2016. The campaign also covers mental health, welfare, and body shaming. Koli, in fact, shared her body-shaming story in May 2017.

Koli even wrote a rap song called “Shameless.” Koli took part in the #GirlsCountForOne campaign in 2018. A non-profit organization that promotes the value of females’ education. Then, in September 2019, Koli flew to the United Nations Headquarters in New York as a delegate to participate in the International Day of Tolerance as well as the Goalkeepers event, a Bill and Melinda Gates Foundation initiative. Koli was one of the content creators who took part in YouTube’s Creators for Change event in May 2018. Koli then made a music video for “No Offense” for her Creators For Change Project, in which she represented India.

In a 2020 episode of Creators For Change, she and two other YouTubers, Liza Koshy and Thembe Mahlaba interviewed girls from other countries about their academic prospects and argued the same topic with Michelle Obama. Koli represented India once more at the “The Call To Unite” program event, which will air on May 1, 2020. The twenty-four-hour ‘stream thong initiative was created by UNITE and Room To Read in order to maintain people facing challenges throughout the pandemic and to provide education to children during the COVID-19 epidemic.

Prajakta Koli’s Income And Net Worth

Who is Prajakta Koli’s Boyfriend? According to certain accounts, Prajakta Koli has been in a love connection with a man named Vrishank Khanal. Prajakta Koli, on the other hand, has never publicly acknowledged their relationship to this day. However, the couple frequently posts photographs and videos of themselves together on their social media pages, along with sweet and amusing messages.

As a result, it appears that Prajakta Koli and Vrishank Khannal are in a love connection. Prajakta Koli tries to maintain a low profile, which is why her personal information is scarce on the internet. Apart from that, Prajakta Koli has never been involved in any unfavorable rumors or scandals.

Prajakta Koli, on the other hand, has 399.3 thousand followers on Twitter and over 1 million on Facebook. Obviously, the Indian YouTuber has her own channel. Her channel’s name is “MostlySane,” and she has 6.26 million subscribers as of July 2021.