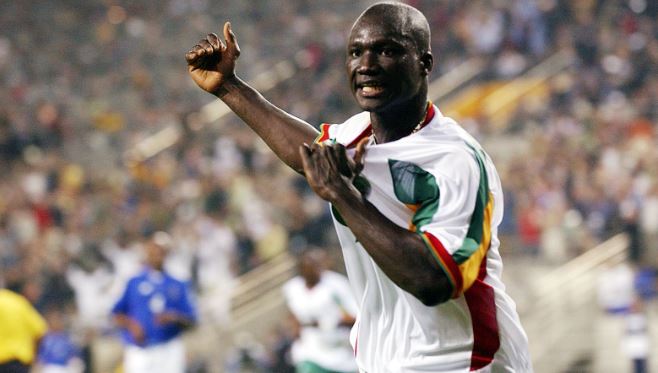 The football community was mourning the death of the iconic star, Diego Maradona when suddenly they were struck with another heartbreaking news, the death of the Senegalese football player, Papa Bouba Diop. Known for his strong and aggressive style, he had helped put Senegal on the map after scoring the winning goal against France in the country’s first FIFA World Cup. Likewise, he had also played for teams like Fulham and Birmingham City.

Papa’s contribution to his country will be remembered, and his presence will be sorely missed. Learn more on Papa Bouba Diop’s cause of death, net worth, and much more.

What Happened to Papa Bouba Diop?

Papa Bouba Diop, Senegalese midfielder, sadly passed away on November 29, 2020, following a long illness. According to reports from L’Equipe, the footballer had ALS. Fulham confirmed the sad news on social media writing,

Nonetheless, Papa Bouba Diop’s family has not shared anything regarding his funeral at the moment. However, we will be sure to update you on his funeral in the coming days.

Papa Bouba Diop was married before his death. He had tied the knot with Mama Bouda Diop. However, the football star had not shared much on his marriage and personal life. There is very little or no information on his wife. Moreover, the footballer had also not shared on his children if he had any.

What is Papa Bouba Diop Net Worth?

Papa Bouba Diop started his football career with the junior team, Ndeffann Saltigue, and later joined ASC Diaraf of the Senegal Premier League in 1996. Likewise, he played with Vevey for a few months and signed professionally for Ligue Nationale A club Neuchâtel Xamax in the 2000 close season. In the December of that same year, he joined the club, grasshoppers, and helped the team win the championship title in his first half–seasons. He moved to France in 2002 and joined Lens of Ligue 1 on a five-and-a-half-year contract.

Following his impressive performance, he signed with Premier League team Fulham for £6 million, signing a four-year deal in July 2004. Likewise, he later signed a five-year deal with Portsmouth for a fee of £3.5 million and made his debut with the team in 2007. Later, he played with teams like AEK Athens, West Ham United, and Birmingham City. Nonetheless, Papa Bouba Diop is best remembered for scoring the first goal of the 2002 FIFA World Cup against France which resulted in a 1-0 defeat. He helped Senegal reach the quarter-finals and ended as the team’s best scorer. Papa Bouba Diop is still under review.

Papa Bouba Diop was born in 1978 in Dakar, Senegal. He celebrated his birthday on 28th January, which makes his age 42. His parents raised him and his siblings in a small town of Rufisque, Dakar.

He held Senegalese nationality and came from African ethnicity. He had a height of 6 feet and 5 inches.