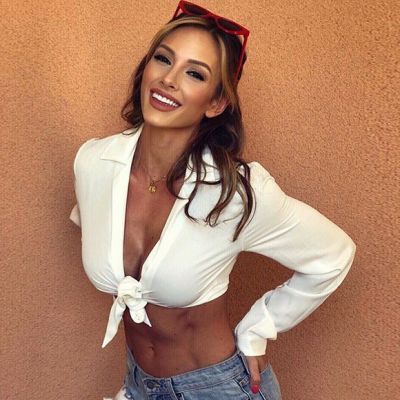 Paige Hathaway was born on July 31, 1987, in the United States. She was born and raised in Minnesota, the United States of America. Paige Hathaway will be 36 years old in 2023, and her zodiac sign is Leo. She still stayed in a trailer with an abusive father and relied on food stamps to get by. Paige’s parents finally separated, and she found herself in the midst of a court dispute at the age of four.

She and her mother were forced to live in a trailer and depend on government assistance. Furthermore, her mother fled to Texas with her, despite a stay order, to be with somebody she encountered online. Paige was turned over to her paternal grandmother after police tracked them down. She was also adopted by some of her other friends after spending years in foster care. She went west to live on her own after turning 16 and settled in the state of Oklahoma.

More about her early years

Paige worked several hours as soon as she was old enough to help pay for her education. She had a love for working out and as an undergraduate, she would work out in the university gym on campus whenever she could. Her food, on the other hand, has never been a priority for her.

Furthermore, she had always been very slim as a kid, with little muscle tone. Despite the fact that she had spent her undergraduate years playing sports and staying healthy, a diet had never become a concern for her. She began to understand that being underweight was almost as horrible as being overweight.

Paige was dissatisfied with her appearance and developed a new ambition to be a healthy and powerful individual. She had intended to be a surgeon at first but ended up with a degree in sports medicine instead. She’s even shared Instagram photos of herself and her bulldog, Banks. She did, though, lose him in April 2020.

Paige has gone from a small-town teenager to a wellness model since growing up in Minnesota and becoming an internet phenomenon. As a result of her enthusiasm for wellness, she has competed and trained as a personal trainer, encouraging others to achieve their goals.

She began training in 2011 and has since developed into an internet phenomenon, with millions of people watching her fitness journey. Paige has been in a number of lifestyle publications, including Women’s Health, and has competed in a number of bikini competitions.

Paige started properly informing herself about fitness after being contacted by a personal trainer at her workout and told about bikini competitions. Her motivation to remain healthy and powerful had increased as a result of her conversation with the trainer. It wasn’t long until she entered her first competition, the Ronnie Coleman Classic. She increased the intensity of her teaching.

Paige Hathaway kept running and working her body harder than she had ever exercised before for the next four months. She took the stage of America’s largest NPC statewide competition after months of intense training. She didn’t win first place, but she did secure a spot on the podium after coming in second.

It wasn’t just pride, however, that she took away from the experience. She knew how much recognition she had received as a result of the competition and was eager for more. She set her eyes on using social media to inspire people.

Making it big on the internet

Paige became the face of a supplement brand after reaching out to fitness and bodybuilding firms. She realized the influence of social networking as she saw how fast her followers rose and how many people cheered her on. After, in 2015, she wanted to establish an Instagram account in order to expand her fan base. She gained a large number of fans almost immediately, who liked her photos of her body and workouts.

She wanted to start a subscription platform and work as a personal trainer as a result of her popularity. To keep her fan base satisfied, she designs customized fitness and eating schedules for her customers, as well as sharing pictures and videos on her website.

Criticism is a necessary part of life.

Paige Hathaway’s determination and diligent work helped her attain popularity, however with success came scrutiny and negativity. It’s straightforward to see how many people’s lives she’s impacted favorably based on feedback on her social network accounts, but it’s still hard to dismiss comments like “women shouldn’t have muscles.” She, on the other hand, understands better and has learned to tolerate venomous remarks.

Chase McNary, the recent ‘Bachelorette,’ announced in March 2017 that he is officially dating Paige Hathaway. Though he didn’t mention her name at first because the partnership was still new, his followers quickly pieced together information from his social media pages to deduce it was Paige, which he later acknowledged.

She is, though, already involved with Jason Moritz Sebastian. They have a baby daughter, who was born on September 13, 2019. Presley Sebastian is her name. Her parents built an Instagram channel for the baby kid, which has over 8K followers. This tiny, happy family went on their first family vacation to Seaside, Florida, on July 20. Jason also proposed to Paige for marriage on June 7, 2019, and she accepted!

She normally follows a rigorous diet all year to maintain her slim figure. Red bell peppers are her favorite nutritious snack. Paige is 5 foot 4 inches tall and weighs about 56 kilograms. Her body dimensions are 35-24-35 inches as well. She has a 34B bra size, a 7 (US) shoe size, and a 10 dress size. Her biceps are also 10.5 inches long. Paige has blue eyes and white locks.