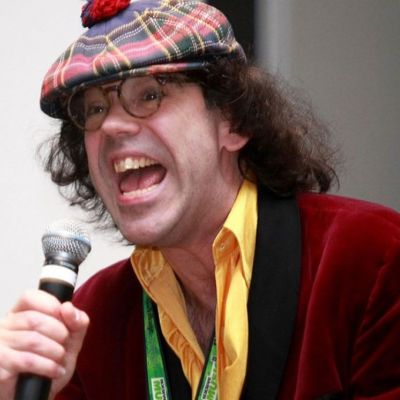 Nardwuar, real name John Ruskin, is a Canadian interviewer and musician best known as the lead singer and keyboardist of the garage rock band The Evaporators from Canada. Nardwuar previously worked at a British Colombia radio station, where he was a regular on Friday afternoons. He is a well-known and contentious interviewer whose job began with two questions “Who are you?” and “From?”

Nardwuar was born on July 5, 1968, in Vancouver, British Columbia, to Vernon and Olga Ruskin. His father was an engineer, and his mother was a high school teacher and a local journalist. He also worked on historical topics and published Gassy Jack, a journal dedicated to Vancouver’s historical figures.

Nardwuar received his secondary education at Hillside Secondary School in West Vancouver. During his childhood, he was a prodigy in public speaking, ranking among the best. He also won a similar competition when he was only six years old. In 1986, he was admitted to the University of British Columbia and graduated with a degree in history.

Nardwuar began his professional career after being hired by the British Columbia radio station CITR 101.9 FM. He was then hired as an interviewer and began conversing with various celebrities, becoming quite popular in the media. He conducts thorough research on the opponents he is interviewing and peppers them with probing questions.

During an interview with Pharrell Williams, he pulled out a vinyl record of Pharrell’s debut album. He was impressed by Nardwuar’s research and speaking abilities, and he finally exclaimed that it was one of the most impressive interviews he had ever given. Also, Drake, a famous singer, told the media how Nardwuar’s meeting and research were so accurate and astounding. He is also a musician, playing keyboard in the band ‘The Evaporators.’

Nardwuar, an interviewer and musician, has not received any official award or nomination throughout his career; however, his work as an interviewer is regarded as one of the best because he has been able to impress so many celebrities with his sheer talent for gathering precise information.

In 1999, an extremely tragic incident occurred with Nardwuar. He had seizures and temporary paralysis, which resulted in a cerebral haemorrhage. Fortunately, he recovered quickly from his condition. In 2015, he had another stroke but was released from the hospital six days later.

He has not revealed anything about his relationship status to the media or his fans, according to media reports. He is most likely single right now.

Nardwuar’s Salary and Net Worth

Nardwuar has amassed a net worth of $15 million as of 2022, thanks to his immense hard work and dedication to his profession. Throughout his career, he has interviewed numerous celebrities and hosted numerous reality shows. He is one of the television industry’s most remarkable personalities.

Nardwuar’s real name is John Ruskin, and he is a Canadian television interviewer as well as the lead singer and keyboardist of the band ‘The Evaporators.’ Throughout his career, he has interviewed many celebrities, including Drake, Billie Eilish, Ellie Goulding, and many more. He also runs the NardwuarServiette YouTube channel, which has nearly 1.5 million subscribers.