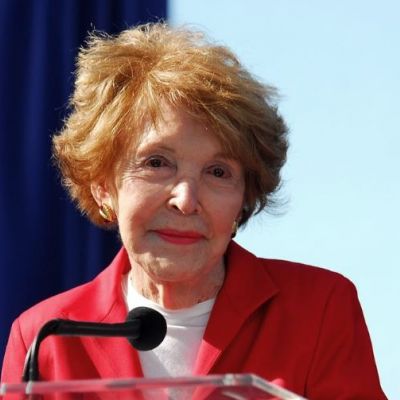 Nancy Reagan was an American actress best known as the wife of former President of the United States Ronald Reagan.

She graduated from the Girls’ Latin School of Chicago in 1939 and received her bachelor’s degree in theater and English from Smith College in Massachusetts in 1943.

Nancy Reagan married Ronald Regan in 1952. Patricia Ann Reagan and Ronald Prescott Reagan are their children. She was also the stepmother of Michael and Maureen Reagan, Ronald’s adopted and biological children from his previous marriage to Jane Wyman.

Nancy Reagan died on March 6, 2016, of congestive heart failure. She was 94 years old when she died. Her funeral was held on March 11, 2016, and many important families attended.

Regan began her career as a volunteer at the National Foundation for Infantile Paralysis in 1940. After graduating from college, she worked as a sales clerk and then as a nurse’s assistant. She made her film debut in 1945 with ‘Ramshackle Inn.’ She has previously starred in the short film ‘The Crippler.’

Nancy Reagan appeared in the 1948 film ‘Portrait of Jennie.’ She later appeared in films such as ‘East Side, West Side,’ ‘Shadow on the Wall,’ ‘Night into Morning,’ ‘It’s a Big Country,’ ‘Shadow in the Sky,’ ‘Donovan’s Brain,’ ‘Hellcats of the Navy,’ and ‘Crash Landing.’

She has also appeared in a number of television shows, including ‘General Electric Theater,’ ‘The Tall Man,’ ‘Wagon Train,’ ‘Schiltz Playhouse of Stars,’ and ‘Ford Television Theater.’

Nancy Reagan’s Salary and Net Worth

Nancy Reagan’s net worth was projected to be more than $25 million as of September 2022. During the 1940s and 1950s, she was a well-known Hollywood actress. Her wardrobe was filled with expensive gowns and jewelry. Her position as the former First Lady of the United States contributed to her riches. She was reported to be worth $25 million at the time of her death. Reagan was also recognized as a woman who dedicated herself to her husband’s care.