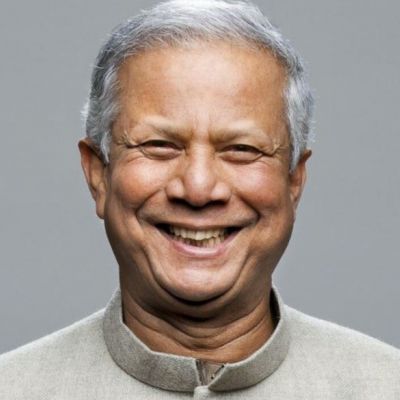 Muhammad Yunus was born in Chattogram, Bangladesh on June 28, 1940. He was the third of nine children. He spent his best childhood in the village before moving to Chittagong with his family in 1944 to finish his education at Lamabazar Primary School.

Later, he passed the Matriculation examination at Chittagong Collegiate School, finishing 16th out of 39000 students in East Pakistan. He was a very active boy Scout during his school years. He traveled extensively, including trips to India and West Pakistan in 1952, and to Canada in 1955 to attend the famous Jamborees.

As a gifted prodigy, he became involved in other cultural activities, including drama, in which he excelled and was awarded prizes. Yunus enrolled at Dhaka University’s Department of Economics in 1957 and earned his BA and MA from the same institution from 1960 to 1961.

In 1961, he was hired as an Economics lecturer at Chittagong College. In 1965, he was awarded the Fullbright Scholarship to study in the United States. As a result, he earned his Ph.D. in economics from Vanderbilt University. He eventually became an assistant professor of economics at Middle Tennessee State University in Murfreesboro after all of this.

A career as an entrepreneur, economist, or even a professor was pursued. Throughout his career, he created layers upon layers of assigned projects.

As a result, his concept of microcredit for assisting several innovators inspired such great inspiring programs as an Info Lady Social Entrepreneurship to help countries develop.

Then came the moment when Grameen Bank and Muhammad Yunus shared the Nobel Peace Prize. The reason for this was that they incorporated their efforts to create social and economic development through microcredit. Furthermore, Grameen Bank and Yunus demonstrated that even the poor could work to alleviate poverty across cultures and civilizations.

Muhammad Yunus was the brilliant son of a jeweler, Hazi Dula (father), and a mentally ill mother, Sufia Khatun (mother). He formed a committee to rally support for liberation and published a newsletter in Nashville.

Following the liberation war in 1971, he was appointed by the government to the planning mission led by Nurul Islam. He struggled, worked hard, and was focused and intelligent throughout his life to achieve success. In 1967, he married Vera Forostenko, a Russian Literature student.

His marriage, however, ended after only a few months, but with the birth of a baby girl named Monica Yunus. Later, he married Afrozi Yunus, the best researcher in Physics, and Deena Afroz Yunus was born in 1986.

Muhammad Yunus’s Salary and Net Worth

Muhammad Yunus’ net worth is $12 million as of September 2022. He achieved enormous success and became a true inspiration as a result of his hard work and passion for his field. Despite the fact that he was never greedy and had a strong desire to work and study hard to achieve his level. As a talented entrepreneur, he was able to keep his worth throughout his life.