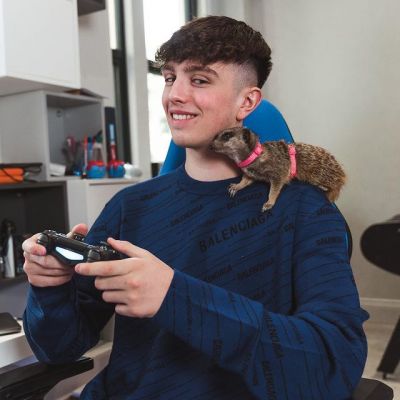 Morgz is a well-known YouTuber, actor, and social media personality from the United Kingdom. Morgz is well-known in the community as YouTube’s most famous prankster who consistently creates hits. He’s also known for being one of the most popular YouTube prank channels.

He is an only child who lives with his dog Bruno. Martin, aka Bald Martin, Morgan’s stepfather, has also appeared in a couple of Morgan’s videos. Apart from the aforementioned fact, Morgz has managed to keep his family history hidden from the public eye.

He launched his YouTube channel in June 2014 with the video “Minecraft Faction Base Speed Build + Tour.” He called his channel ‘ItsMorgz’ at first, but later changed it to simply ‘Morgz.’ The first videos on his channel were all about him demonstrating his gaming prowess in games like Minecraft and, most notably, FIFA.

In the meantime, he’d share Q&A videos as well as celebratory videos for different subscriber milestones. Morgz’s mother is a big part of his website, appearing in a number of his videos as a guest or a prank “victim.” He began with a gaming channel known as “LegendaryGamersHD.”

Morgz was also known for his gaming setup videos. His second public Gaming Setup becomes his first video to exceed 1 million views, with his previous Gaming Setup, which he made around the time he reached 1,000 subscribers, becoming his second most successful. Morgz revealed his P.O Box, where fans can give him fan mail, and filmed himself opening fan mail.

Morgz also did London Vlogs with five other YouTubers, Wills, TheBlueDan, Swarmzy, Skillzer, and Treeny, at the Sidemen Pitch, doing the Crossbar Challenge together. And, since the launch of ‘Pokemon GO,’ Morgz has generated a large number of Pokemon GO videos. “MY BEST POKEMON CATCH!!! – POKEMON GO! – SO MANY CP 1,000+ Pokemon!” was his most successful. It was his most famous video in a week, with over 6 million views.

Morgan later began doing challenges, DIYs, and vlogs, which gave his channel a significant boost and development. He continued to do vlogs, challenges, and DIYs after the big development. He also completed a number of challenges while on a trip to Cyprus, which provided him with yet another boost. Morgz was also mocked as a “disease” in the Sidemen Family Fortune in a Sidemen Sunday video.

Struggle in the Channel

Morgan’s channel was slowly rising, not getting a lot of views, and sometimes losing a chunk of subscribers after posting a video after the success of DIY’s, challenges, and vlogs. His average view count per video is at least 200,000, though some videos get much higher. Morgz struggled in the second half of 2017 before returning to his previous pattern of pranking with song lyrics, which garnered millions of views. He’s even been involved in a few scandals. However, he defeated them.

MorgzFest is a music festival that takes place every year.

Morgan and his family revealed on July 21, 2019, that they would be hosting an event called “MorgzFest” on August 31 and September 1. Pyrocynical was supposed to perform at MorgzFest, but it was canceled due to the festival being overrun with children. Despite not being able to attend the gathering, some of them were able to take a photo with Morgz. On November 13, 2016, the ‘MorgzFest’ YouTube channel was launched. It has amassed over 83.6K subscribers to date.

He was dating Kiera Bridget at the time. With Morgz, she’s done a lot of competitions, pranks, and “surprising” videos. While they are no longer together, they remain close friends. They were from the middle of 2018 to the middle of 2019. As a result, they announced their breakup on Instagram and Twitter on July 30th, 2019. He is currently dating ‘Tamzin Taber,’ a fellow social media star.

This incredible personality has preserved a healthy and muscular body. He stands at 6 foot 3 inches tall, which is very impressive. In addition, he weighs about 79 kilograms. His biceps are also 14.5 inches long. His chest, hips, and hip measurements are 40-32-33 inches. In addition, he has brown eyes and hair of the same hue.

Morgan is a famous figure on social media. As a successful YouTube star, he would be able to make a lot of money. His net worth is estimated to be around $8 million.