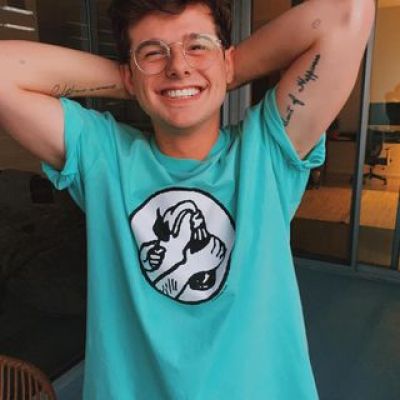 Mikey Murphy is a well-known American YouTube personality with his own channel. Mikey Murphy’s YouTube channel, which was formerly known as MikeIsAverage, now has over 1.73 million subscribers.

He has a younger sister named Sydney as well. She is a year and a half younger than he is. These two siblings didn’t get along well as children, as he mentions in one of his vlogs. They do, however, help each other in all at this stage. He has spent a lot of time practicing Karate. He began speaking before the age of one.

Furthermore, while in high school, Mikey created a YouTube channel for his school project. He also received a lot of backlash from his high school peers for it, and when things didn’t improve, he was forced to drop out. He is, however, unconcerned about it because he has made a name for himself thanks to his YouTube channel.

What is Mikey Murphy’s Height? Mikey Murphy, a 22-year-old gorgeous hunk, is a good-looking guy. He stands 5 feet 6 inches tall and weighs about 65 kilograms. He, too, has a pair of hazel eyes and dark brown hair. There is also no detail about his other body stats, such as dress size, shoe size, and so on.

Mikey Murphy’s professional life is known for his YouTube channel “MikeIsAverage.” He later changed the name of his YouTube channel to his own. He uploads vlogs and participates in different challenges. He first entered the social media world through YouTube, where he co-founded ‘The Original Fiction TV’ with his high school friend Liam in order to publish a project assignment. He’s been interested in photography and filmmaking since he was a toddler.

Furthermore, he collaborated with another YouTube star, Luke Korns, and even posted a number of collaborative videos, which helped him gain popularity for his now-main YouTube channel. He has now relocated to Los Angeles, California, in order to be closer to the film industry. For videos like “What I do when I’m home alone,” he is also known as the “ordinary internet vlogger.”

He received a lot of criticism from his peers when he created the channel for his school project, which led to him dropping out. That, however, never stopped him from pursuing his dreams of being an actor and YouTube personality. He liked social interactions on his site, as he stated in one of his videos.

Later, at the “Playlist Live” function, he met Luke Korn, who runs the “UncleKornicob” YouTube channel. They collaborated on a number of videos, ranging from challenges to pranks. He began working with Jonah Green after relocating to Los Angeles. He also worked for well-known firms such as ‘Big Frame’ and ‘Creative Artists Agency.’

On March 8, 2013, he launched his now-main self-titled YouTube channel. On March 18, 2013, he released his first video, “What I Do When I’m Home Alone!” which has nearly 161,134 views. On November 30, his self-titled YouTube channel surpassed a million subscribers, and he thankfully posted the achievement as a vlog. His channel has over 1.73 million subscribers and 106 million video views as of May 2020.

FILMS, PEOPLE TELL THEIR CRUSH THEY LIKE THEM, YELLOW, PINK, and BLUE are among his YouTube video material. “DEAD WONDER,” “KALISPELL,” “STEVEN,” “MAXINE THE HERO,” A Short Film About Depression,” and many others are among the short films on his channel.

His frequent trips to fame street have attracted the attention of channels such as “AwesomenessTV.” He’s also frequently seen on their channel, hosting events and appearing in a show called “Royal Caribbean.”

He also supports a number of good causes, such as the “Thirst” campaign, which seeks to end the global water crisis. On June 13, 2016, he was also spotted at the 7th Thirst gala, which was held at the Beverly Hilton Hotel in Beverly Hills, California.

Later, he moved into conventional film and television acting and directing. Authentic Literary Management and Abrams Artists Agency represent him. He’s also appeared in a Magcon Boys video performing Would You Rather. Hayes Grier, Aaron Carpenter, Carter Reynolds, and Matt Espinosa are the members of the cast.

Mikey Murphy’s Income And Net Worth

How much is Mikey Murphy’s Income? In terms of Mikey Murphy’s earnings, he is a well-known YouTube star who has amassed a sizable fortune from his channel. He has 45k subscribers on his self-titled YouTube channel. In addition, he receives money from his extra job. As a result, his net worth is projected to be around $1 million.

Who is  Mikey Murphy’s Girlfriend? Mikey Murphy is in a relationship with Olivia, according to his dating status. She is a well-known YouTube star. Since January 22, 2019, they have been dating. On their social media accounts, the pair shared photos of themselves. They make a really sweet and attractive couple.

He was previously linked to Instagram sensation Griffin Arnlund. The couple had been dating since September 2015 but ended their relationship in the fourth quarter of 2016. They were often seen in their YouTube videos.

In addition, despite his involvement in the social media community, he has kept a clean profile and has not been linked to any controversial facts or rumors.

Similarly, he has more than 364.5K Twitter followers and about 117k Facebook fan followers. He has a self-titled YouTube channel with 1.73 million subscribers and almost 106 million views. On social media, he has described himself as “the real-life Peter Parker” without the “superhero” tag.