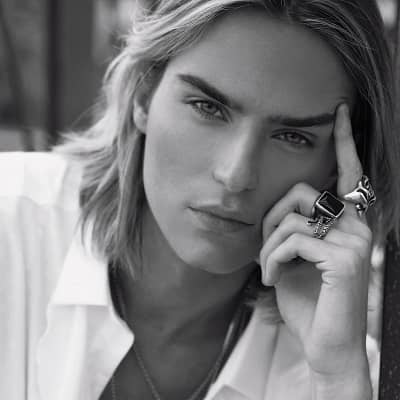 Luke Eisner is a well-known actor, model, musician, and social media celebrity from the United States. Luke Eisner is most known for his performance as Stig Mohlin in the Netflix film “Tall Girl” from 2019.

Luke Eisner is a 24-year-old actor who was born on August 1, 1996. Luke is an American citizen who was born in the state of Wisconsin. He, too, comes from a Christian household and was born under the sign of Leo.

His father’s name is Bill Eisner, and his mother’s name is Denise Eisner, according to his family information. Luke comes from a wealthy family of businessmen and philanthropists. His mother, on the other hand, is a stay-at-home mom who raised Luke. In addition, his grandfather, William Eisner, is a designer and entrepreneur in the advertising industry. His father, too, was an advertising promoter who had previously worked for Coca-Cola.

Luke attended Greendale High School, according to his educational background. Similarly, he enrolled in the Thornton School of Music at USC and graduated in 2018.

A Career in Music

Luke has always had a passion for music. Him cousins David and Paul, who own a DJ company, used to enlist his assistance. Luke founded his own DJ company, Luke Eisner DJ and Lightening LLC, a year later.

Luke grew his career from a simple wedding DJ to performing at numerous Milwaukee music clubs. He also performed at a few charity events. In the same way, Luke met his friend Gus Ross while attending music school. They formed VOILA, a two-piece band. They released their first single, “Don’t,” in 2018. Since then, they’ve published a number of tracks and collaborated with a number of artists.

Career as a model

Luke signed with IMG Models in 2018 and began his modeling career. He has collaborated with a number of well-known companies, including H&M and Calvin Klein. He’s also been featured in a number of publications, including Da Man Magazine, Cool America, and others. His modeling profession enabled him to gain sufficient notoriety, which aided his acting career.

Luke began his acting career in 2019 with the TV comedy series “The Goldbergs.” He played Evan Dando in the series. In the same year, Luke starred as Taylor in the TV series “Timeline,” a fantasy comedy. He made an appearance in six episodes of the show.

Luke made his cinematic debut in 2019 with the Netflix comedy flick “Tall Girl.” In the film, he played Stig Mohlin. Luke recently starred as Cody in the popular TV series “Family Reunion” in 2020. He also starred as Seth in the film “Tiger Within” the same year. In addition, his next film, “Growing Up Groman,” is currently in pre-production.

The multi-talented actor has amassed a respectable fortune. Luke has a net worth of $600,000 US dollars, according to online sources. His acting job is his primary source of income, followed by modeling and music.

Luke Eisner is in a relationship with Kirby Johnson right now. Kirby is an American actress best recognized for her part in Hannah Grace’s Possession. In the year 2018, the couple began dating. The duo also has a vlog account on YouTube. Luke and Kirby are currently enjoying their lovely relationship and haven’t announced anything about their nuptials.

Luke is active on Instagram and YouTube, where he discusses his various social media accounts. Luke has over 639k Instagram followers and 108 posts to date. Similarly, Luke and his girlfriend Kirby maintain the “Kirby and Luke Diaries” Youtube channel, which has over 9.32k subscribers. They have a channel where they upload random vlogs.