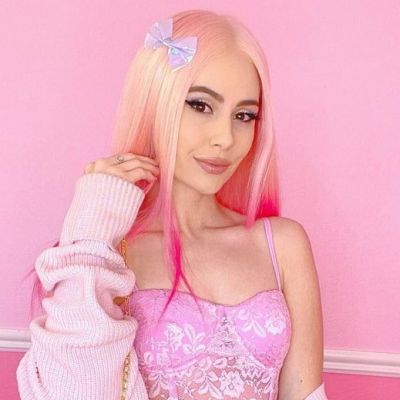 Leah Ashe is a YouTube vlogger and gamer from the United States who has over 4 million subscribers. On her Youtube account, Leah Ashe primarily posts Roblox roleplays and makeup makeovers. She also uses Mixer to stream live and is active on Instagram.

Leah Ashe was born on September 2, 1993, in California, United States. She is 27 years old and was born under the Virgo zodiac sign. She is a citizen of the United States of America. Her true name is Leah Ashley, as well.

At this time, Leah’s parents’ names and details are unavailable. Amber, her younger sister, is her only sibling besides her parents. Amber is a YouTuber as well. Leah also has a Youtube channel called “Sister Squad,” which she runs with her sister Amber. She also relocated to Los Angeles, California, from San Francisco. Apart than that, there is no more information regarding her family. She also has a pet husky named Astro, for whom she has made an Instagram account.

Leah’s educational background and qualifications are unknown at this time, as are the names of the educational institutions she attended. Unless she is a dropout or has opted to stop further education, she must have graduated from both high school and university, based on her age.

Leah Ashe started using Twitter in 2011 and shared her first Instagram photo in February 2012. “joblessastro” is the Instagram account she created for her husky dog Astro. She subsequently went by the moniker “Leah Ashe” to create her gaming and lifestyle website. Since its inception on May 2, 2016, the channel has received a total of 1,110,919,236 views. She primarily posts gaming videos about Roblox, Royale High, Roleplays, and other games.

Leah has also been using it to share video game roleplays, micro videogames, and other intriguing things. In addition, she has a playlist for each video game she has available on her channel. Her Youtube account offers a variety of gaming videos across several gaming platforms, ranging from Roblox and Minecraft roleplays to GTA5 and Pokémon. Similarly, in addition to gaming content, Leah’s channel features a lot of cosmetics transformation videos, the most of which are holiday-themed. She has also shared a number of vlogs and joint videos.

I Spent 24 Hours In My Boyfriend’s Mansion And He Had No Idea… is her most popular video on her YouTube account. This video was published on September 26, 2018, and it has received 16 million views to date. SNEAKING INTO THE BOYS SPA AND BEING TRAPPED OVERNIGHT!, WATCHING THE LAST GUEST! (I CRIED SO HARD), REACTING TO THE SCARIEST ROBLOX MOVIE EVER… are some of the other popular videos on this channel. I COULDN’T SLEEP AFTER THAT!, and My Crush Only Liked Me Because I Adopted The Cutest Pets… Adopt Me is a roleplaying game. To date, all of these videos have had over 8 million views.

In addition, Leah Ashley has a separate Youtube channel called “Leah Ashley.” This channel was founded on August 2, 2019 and has accumulated a total of 20,454,469 views to far. On this channel, she posts vlogs, challenges, and reaction videos. This channel, however, is not as popular as her primary channel, although it is gradually accumulating subscribers.

Leah Ashley also has a second YouTube channel called “Sister Squad.” This channel was created on April 23, 2020, and it currently has 36,103,895 views. On this channel, they post videos of Roblox games. Despite the fact that the channel is new, it has quickly attracted a large number of subscribers in just a few months.Leah is also quite active on TikTok. Under the name “leahashe,” she has a TikTok account. She has so far published 69 videos on her TikTok page, garnering 31.5 million likes. Ashley has a sizable following on TikTok and is rather well-known. Her TikTok videos are all quite entertaining, attractive, and fascinating to watch.Leah also has additional social media accounts, including Instagram, Twitter, and Facebook. She has hundreds of fans on various social media profiles as well. She is also quite active on all of her social media sites.

Currently, Leah Ashley is unattached. She is more concerned with her profession than with being in a love relationship. Focusing on her previous relationships, she was dating Garrett Sutton, a fellow gamer. On his “JoblessGarrett” YouTube channel, he is known for posting Grand Theft Auto gameplay videos and FPS games. They frequently share photos on their social media profiles with one another. In October 2018, the pair became engaged, but their relationship terminated in December 2019. Leah is now a free woman.

Leah Ashe stands 5 feet 5 inches tall and weighs 55 kg. Her other physical measures are 32-23-34 inches for her chest, waist, and hips, respectively. Similarly, her natural hair color is unavailable because she has colored her hair pink and blonde. Furthermore, she has incredibly attractive hazel eyes.

Leah Ashe is quite active across all of her social media platforms. She has 4.27 million subscribers on her main channel and 580 thousand on her secondary channel. Her sister’s YouTube channel, which she co-owns, has 450K subscribers. She also has 576K Instagram followers and 331.4K Twitter followers. Leah also has 89.5K Facebook followers and 2.7M TikTok followers.Her net worth is $1.8 million, based on her earnings and income. Youtube is her primary source of revenue.