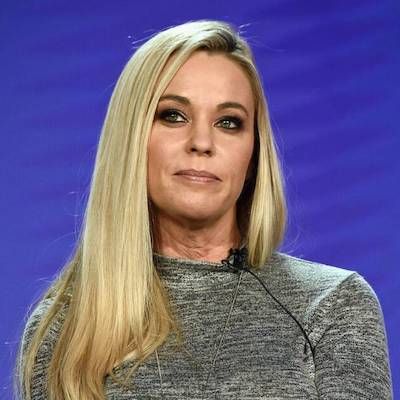 Kate Gosselin is an author and television personality from the United States. Kate Gosselin rose to fame after starring in Jon & Kate Plus, a reality television show in which she and Jon raised their unusual family of sextuplets and twins.

In Wyomissing, Pennsylvania, Kate worked as a labor and delivery nurse. After giving birth to sextuplets, they caught the attention of the media and were invited by NBC TV Network to star in a reality show called “Home Delivery” in 2004. Later, in 2005, they were featured in the Discovery Communication-sponsored one-hour special “Surviving Sextuplets and Twins: One Year Later,” which aired on the Discovery Health channel. They were then seen in the Jon & Kate Plus 8 / Kate Plus reality series from 2007 to 2017. She filmed a talk show with Paula Deen in 2009, but the television network did not pick it up.

Then, in 2010, she appeared on the tenth season of Dancing with the Stars as a contestant. She was severely chastised for her dancing and was eliminated in the fifth round of the competition. The following year, she was given her own show, Twist of Kate. The family was then featured on Celebrity Wife Swap in 2013, where she took over for Kendra Wilkinson for one episode. They were also included in the two-hour special Kate Plus Eight: Sextuplets Turn 10 in 2014, as well as on the competitive reality series The Apprentice the same year (U.S. season 14).

She has published books such as Several Blessing in 2008. The book debuted at number five on The New York Times Best Sellers list, selling over 500,000 copies in its first week. Her second novel, Eight Little Faces, was published the following year and was also a New York Times Best Seller. She published her third novel, I Just Want You to Know, in 2010 and Love is in the Mix in 2013, after a good career as an author.

On March 19, 2014, it was announced that she and her eight co-stars would return in a June reunion special. On January 13, 2015, she returned to TLC’s Kate Plus 8 for a second season. Season 5 premiered on TLC on November 22, 2016, and season 6 (with just three episodes) premiered on July 10, 2017. During Season 6, Jon and Kate had a custody dispute over two of their eight children, Collin and Hannah. As a result, they decided to stop filming the show.

TLC revealed in May 2019 that Kate Plus 8 will return after almost two years with a new dating show named Kate Plus Date, which premiered on TLC on June 10, 2019.

Kate Gosselin has published three non-fiction books in addition to becoming a reality star. Multiple Blessings, a co-written book with Jon Gosselin and Beth Carson, was published in November 2008. By the end of 2009, it had reached number five on The New York Times Best Sellers list and had sold over 500,000 copies.

Who is Kate Gosselin’s Boyfriend? Kate Gosselin is divorced from Jon Gosselin and is single. They met at a picnic in 1997 when she was working in a hospital. They married on June 12, 1999, after dating for two years. They later discovered she had PCOS, which prevented her from being pregnant. She gave birth to twins Cara and Madelyn after the operation. In 2004, she was again blessed with sextuplets, this time with Alexis, Leah, and Hannah as daughters and Joel, Collin, and Aaden as sons. However, one of the seven children did not survive.

On the June 22, 2009, episode of the reality show, she and her husband Jon declared their separation. Nonetheless, on the day the episode aired, the couple met with Pennsylvania lawyers to discuss ending their arrangements for divorce rather than separation. The couple has stated that their eight children will remain in their Pennsylvania home and that they will travel back and forth to help with the custody arrangement.

The duo confirmed in separate interviews that the show will continue. TLC, on the other hand, announced on June 23, 2009 that the show would be canceled immediately. They had shifted the focus away from the family to make a change in the dynamic, as well as the production problems that had arisen since they were no longer living together, according to TLC.

After a physical altercation on August 13, 2009, the two had to call the cops to the Gosselin family’s home in Wernersville, Pennsylvania. She arrived at the house during her husband’s scheduled time with their children, and her presence was not an endorsement of the babysitter he was employing. However, no charges were filed against either side, and no arrests were made. The couple, however, is now divorced. On December 18, 2009, their divorce was finalized. Kate denies dating Jeff Prescott and Steve Neild, according to reports. She was also given primary custody of the children and possession of the family home.

She has a contentious relationship with her ex-husband, which has often made headlines, as of November 2016. Her ex-husband plans to take her to court for joint physical and legal custody of the twins, and the two are once again fighting for custody. She, on the other hand, has complete custody of the twins and sextuplets, while he is only allowed visitation.

Despite her celebrity, she has yet to win any of the awards and nominations she has earned. Her hard work and dedication, however, can still help her win several awards in the near future.

Kate was embroiled in controversy after accusing her ex-husband Jon of being a drug dealer and having an inappropriate relationship with daughter Hannah three times in five days. Then Jon retorted that Kate would go to any length to get what she wants, including lying to the police. Other issues surround Kate, including the fact that much of the story about Gosselin’s book is based on Bobbi McCaughey’s. She was rumored to have undergone breast augmentation surgery. Furthermore, she was rumored to be having an affair with married bodyguard Steve Neild, which TLC tried to hide.

Kate Gosselin’s Income And Net Worth

How much is Kate Gosselin’s Income? Kate’s net worth is believed to be around $200,000. Her earnings come from her television programs and book sales. She was the owner of a 6000 square foot house in Pennsylvania, and there is no detail about her automobiles. Her show appears to pay her between $22,500 and $40,000 per show. Her eight children’s college tuition consumes the majority of her earnings.