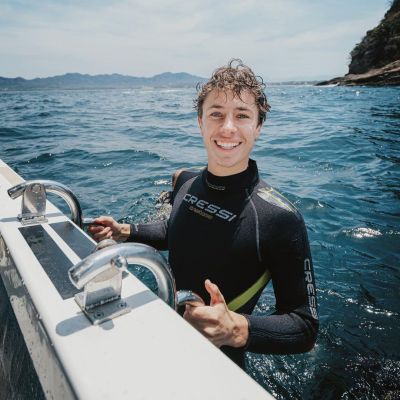 Juanpa Zurita was born on March 29, 1996, in Mexico City, Mexico, as Juan Pablo Martinez-Zurita Arellano. His zodiac sign is Aries, and he is 24 years old. Similarly, Teresa Arellano and Fernando Martinez-Zurita Reed gave birth to Juanpa. He has three siblings: Fernando and Andres Zurita, two brothers, and Paola Zurita, a niece.

Juanpa is of Mexican descent and of Latino heritage. Despite the fact that Juanpa grew up in Mexico, his family eventually settled in Washington, DC. When his father was working as a political advisor at the Mexican Embassy in Washington, D.C., he and his family moved to the United States when he was in his early teens. Juanpa and his family have recently relocated to Los Angeles. Juanpa also graduated from Florida State University with a degree in Business Management.

Juanpa got his start in the social media world with his Vine account. He received a million views for his funny vine, “The dog killed Chuck Norris and was after me,” which he shared at the age of 17. Juanpa created content in both English and Spanish, and his attractive appearance drew a large number of viewers. Furthermore, he had no intention of looking back since then. Juanpa became one of Mexico’s most famous vine stars. Similarly, he has worked with a number of other vine stars, including Jerome Jarre, his brother Andres Zurita, and others.

In the same way, as his popularity grew, he gradually began to open his YouTube channel. He entered Youtube on October 21, 2016, and his ‘Juanpa Zurita Comedy’ channel now has 1.89 million subscribers. It didn’t take long for Juanpa to build a following here, thanks to his popularity in Vine. Furthermore, his videos are amusing. Juanpa, including Rudy Mancuso, Anwar Jibawi, Hannah Stocking, Lele Pons, and Twan Kuyper, has collaborated with a number of fellow YouTubers.

Juanpa has also modeled for some of the most well-known fashion brands in the industry, including Calvin Klein, Louis Vuitton, Pull & Bear, Dolce & Gabbana, and several others. Juanpa was also one of the Millennials who posed for Dolce & Gabbana during their January 2016 Fashion Week in Milan. Cameron Dallas, Diggy Simmons, Austin Mahone, and Lucky Blue Smith were among the models. He also had the opportunity to star in the Netflix series Luis Miguel.

Juanpa has also volunteered for a number of charitable causes as a result of his social media fame. In March 2017, he and fellow YouTubers Jerome Jarre, Casey Neistat, and Ben Stiller launched a campaign against famine in Somalia. They organized the ‘Love Army for Somalia,’ which raised more than $1.8 million. In May, Juanpa flew to Somalia on Turkish Airlines to distribute the food that had been brought to Somalian families.

Net worth and award

Juanpa is looking forward to a bright future. Having said that, he has amassed considerable celebrity since his pre-teen years, when he began his career. Juanpa has been nominated for and received several awards. In the 2015 MTV Millenial Awards, he was named “Digital Icon of the Year” and “Viner of the Year.” Juanpa also won the MTV Millenial Awards in 2016 for ‘Mexican Snapchatter of the Year’ and ‘Best Performance in an App.’ It was also named ‘Digital Icon of the Year’ two years in a row, in 2015 and 2017.

Juanpa’s net worth is $1.5 million, and YouTube is his primary source of revenue.

Carmella Function is Juanpa’s new girlfriend. He has, however, been linked to a number of fellow YouTubers and has even dated a few. Juanpa has also been linked to Lele Pons, a Youtuber.

Juanpa is approximately 5 feet, 8 inches (68 inches) tall, weighs 65 kilograms, and has a slim body shape. Similarly, he has grey eyes and blonde hair. However, there isn’t a lot of detail available about his body measurements.

Some Facts about Juanpa Zurita