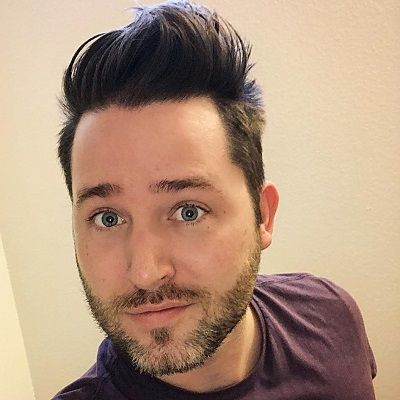 Similarly, he has two siblings: an elder brother, Jeremy, and a younger sister, Erin. Evans also attended The American Musical and Dramatic Academy.

Joshua is a beautiful hunk who stands 6 feet tall and weighs roughly 74 kg. He has a physically fit and healthy body. He has brown hair and gray eyes. There is no additional information on his bodily stats. He has a fantastic personality.

Evans began posting to YouTube in 2008 under the username ‘Joshuad84.’ With a change in the name of his channel to ‘JoshuaDTV’ and a whole new twist in the video content, he quickly rose to recognition and began his career as a full-time YouTuber.

On May 26, 2010, the ‘JoshuaDTV’ YouTube channel was launched. From challenge videos that occasionally feature his ex-wife to vlogs like ‘My wife watches me poop,’ it appears like his star is set to soar!

Not only does JoshuaDTV have a plethora of comedic genres, but he also has a plethora of song covers that display his talent as a singer! Covers by well-known YouTube vocalists such as Madilyn Bailey and Megan Batoon.

In some of his videos, he portrays a persona named Sara Dikulous. In December 2014, he and Matthias released the video “WORST CHRISTMAS EVER TAG.” Evans is pals with Julien Solomita and Arnold Telegaarta, both YouTubers. They formed The Shadows and released the single Vlog With Me as a boyband.

In May 2018, he released Seasons, an EP. ‘Changes,’ ‘Summertime Masterpiece,’ ‘Fading,’ ‘Never Going Back,’ ‘Broken,’ and ‘Feeling Good’ are among the six original tracks on the EP. He is also a YouTube personality, singer, filmmaker, and actor.

He is popular among the general public because of his optimistic view on life and his motto such as “Be good to people.” Joshua Evans has struck a chord with his followers as an advocate of all things kind and humble, making him more than simply another YouTuber.

He refers to his supporters as “Dingleberries.” Furthermore, he begins his vlogs with the phrase “What’s up internet!!” ”. He used to be a daily YouTuber, but in 2016, he only did 3-4 videos each week. He had been inactive for four months as of March 2020.

In July 2015, he married Colleen Ballinger, but they split in 2016. After more than a year, Joshua and Colleen took to their respective ‘YouTube accounts, both sobbing and heartbroken, to update their audience on their divorce.

Though both sets of fans expressed their condolences and warm thoughts, some of his admirers felt that he ‘blamed’ Colleen for the divorce. He did, however, announce that in order to cope with the unexpected heartbreak, his younger sister would take over his channel for a bit.

In April 2018, Evans confirmed that he was dating actress and singer Pamela Rose Rodriguez. They’ve been friends for 15 years. However, he has chosen not to capitalize on his connection and wants to keep things secret.

Evans had previously produced a video in which he stated that he flew down to New York to propose to Rodriguez. He did, however, state that he will not show the suggestion. In June 2018, he proposed to Pamela Rodriguez. They married on August 18, 2018, according to a tweet.

As a social media celebrity, he is active on numerous social networking platforms. On his official Facebook page, he has over 60K fans. He is well-known on Instagram, where he has over 585K followers under the moniker ‘@joshuadtown.’

Similarly, he can be found on Twitter, where he has over 308K followers.

Joshua David Evans, a skilled YouTube celebrity, would undoubtedly make a small fortune from his profession. His net worth is estimated to be approximately $500,000. He makes the majority of his money from his YouTube account.