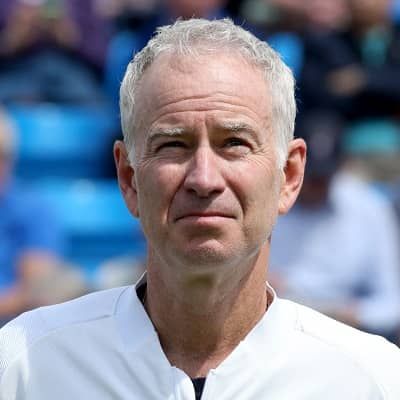 John Mcenroe is a former tennis champion from Germany. John McEnroe is well-known for his commanding attitude and outstanding performance on the tennis court.

Who is John Mcenroe? John Mcenroe was born on February 16, 1959, in Wiesbaden, West Germany. John Patrick McEnroe Jr. is his given name. Aquarius is the 62-year-old former champion’s zodiac sign. The ex-tennis player was born into an Irish-American household. He was also the son of her father, John Patrick McEnroe Sr, and his mother, Katherine Tresham. He is the eldest of three brothers and sisters.

Moving on to his educational history, he graduated from the prestigious Trinity School in New York. He excelled in sports such as basketball, soccer, and tennis from an early age. He began playing tennis at the ‘Douglaston Club’ with his brothers Mark and Patrick when he was eight years old. Patrick would go on to become a well-known professional tennis player.

Furthermore, when he was nine years old, his parents registered him in the Eastern Lawn Tennis Association. In addition, he attended Port Washington Tennis Academy on Long Island, New York. However, he was expelled from the academy for his naughty antics. His outstanding tennis play won him a scholarship to Stanford University, where he attended in 1978.

What is John Mcenroe’s Height? When it comes to physique measurements, John stands tall at roughly 5 feet and 11 inches. His hair is grey, and he has brown eyes. Aside from that, there is no information known on McEnroe’s physical size and measurements.

After graduating from high school in 1977, a significant series of events occurred in John’s career. That year, he traveled to Europe and won the French Juniors Tournament. John, who is 18 years old, made history by being the youngest player to reach the Wimbledon semifinals.

After his freshman year, he decided to pursue a career as a professional. McEnroe was knocked out of Wimbledon in the first round in 1978. He did, however, make it to the fourth round of the US Open.

At this point, McEnroe began his long dedication to the Davis Cup tournament. Tony Trabert gave the 19-year-old McEnroe a chance, and he handled the pressure admirably, winning the match against England. With his victory, the United States regained control of the Davis Cup for the first time in six years.

McEnroe’s rivalry with the unflappable Swede, Björn Borg, dates back to 1980, with the Wimbledon final in July of that year. The match lasted four and a half hours, with the fourth set ending in a memorable 34-point tiebreaker. In a confrontation, Borg won with scores of 1-6, 7-5, 6-3, 6-7, 8-6. Who knew the contest would go down in history as one of the most spectacular tennis matchups of all time?

He played 85 matches in 1984, winning 82 of them. Among his 82 victories are the fourth WCT final, the third US Pro Indoor Championship, and the second Grand Prix Masters title. He won his third Wimbledon title, easily defeating Connors (6-1, 6-1, 6-2), and his fourth US Open title, easily defeating Ivan Lendl (6-3, 6-4, 6-1), and finished the year ranked number one for the fourth time in a row.

Who is John Mcenroe’s Girlfriend? In terms of marital status, John is a married man. In his lifetime, he married twice. On August 1, 1986, he married his first wife, Tatum O’Neal. Tatum is a multi-award-winning American actress. He had three children with Tatum. After an 8-year partnership, John and Tatum filed for divorce.

After three years of divorce, he married American singer Patty Smyth. He has two daughters from her first marriage, as well as a stepdaughter from Smyth’s first marriage.

John Mcenroe’s Income And Net Worth

How much is John Mcenroe’s Income? His net worth is estimated to exceed $120 million by 2021. He is also one of the world’s top 25 richest tennis players. His talent has enhanced his net worth, and he has been cast in a number of films.

John Mcenroe is quite active on social media, with over 8000 followers on his Twitter account. John McEnroe has accumulated substantial wealth. He has a large net worth. He looks to be successful in making a good living from his professional career.