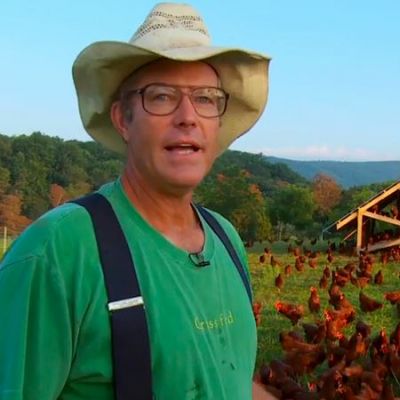 Joel Salatin is a farmer, author, and lecturer from the United States. He became well-known for his works.

Venezuela is where Salatin was born. His grandfather loved beekeeping and gardening. Salatin’s father was a tax preparer. His mother used to be a physical education teacher at the school. Salatin’s parents had bought the land and raised cattle using organic farming methods. However, they were unable to make a living solely through farming.

Joel Salatin studied English at Bob Jones University. He was the president of a university student organization. At the Staunton Curb Market, Salatin has a family farm. After graduating, he began his own business selling rabbits, butter, chicken, and eggs from his farm.

He is a full-time farmer in Virginia’s Shenandoah Valley. In addition, he is a motivating speaker on food policy and sustainability. His audience is impressed by his conviction-based amusing speeches, which are similar to theatrical performances. He has received standing ovations for many of his speeches.

Joel Salatin, a third-generation farmer, began his full-time farming career in 1982. He worked hard and consistently to improve his skills and gain more knowledge in order to advance in his career.

Joel F. Salatin is a well-known American farmer, author, and lecturer, best known for his books Folks, This Ain’t Normal, Salad Bar Beef, and You Can Farm.

He writes about profitable regenerative farming as well as cultural philosophy topics like heresy and orthodoxy. He has an incredible ability as a wordsmith and expert communicator to move his audience from laughter to tears, from hopefulness to frustration. His enlightening, informative, and inspiring lectures are met with critical acclaim and standing ovations.

Polyface Inc., his family’s farm, has been featured in Smithsonian Magazine, Gourmet, the National Geographic Channel, and a variety of other TV, print, and radio outlets. His grass farm was featured in the New York Times bestseller Omnivore’s Dilemma by the renowned documentary Food Inc. and renowned food author Michael Pollan.

Salatin’s farming philosophy emphasizes healthy grass on which cattle can thrive in a symbiotic nursing cycle. He received the 15th Annual Heinz Awards for his special consideration for the environment.

Salatin married his childhood sweetheart, Teresa Salatin, in 1980. The couple has one child, Daniel Salatin, together. The same year, Joel Salatin was featured as an author in the Virginia newspaper “The News Leader.” He has also served as the chief editor of the agriculture magazine “Stockman Grass Farmer,” which promotes pasture-grazed livestock. Along with this magazine, he had the opportunity to teach a two-day course on agribusiness marketing.

Joel Salatin is a Christian libertarian conservationist and entrepreneur. People all over the world regard him as one of the most popular farmers. They call him the high pastor of the grasslands and Virginia’s most diverse intellectual. Apart from farming, he enjoys mentoring youths, inspiring visitors, and promoting regenerative and local food and farming systems.

Joel Salatin’s Salary and Net Worth

Joel Salatin is a well-known farmer and author in the United States. As of June 2022, his net worth is expected to be $2 million. Agriculture and the sale of his published books are his main sources of income.

Salatin owns a farm of 550 acres (220 hectares). This farm was prominently featured in Michael Pollan’s book The Omnivore’s Dilemma (2006), as well as in a few documentary films “Food Inc.,” the New York Times bestseller Omnivore’s “Dilemma,” and an award-winning documentary.

With pigaerator pork, salad bar beef, forestry products, and pastured poultry, this farm currently serve over 5,000 families, ten retail outlets, 50 restaurants, and an agriculturalists’ market. All of this contributes significantly to his net worth.