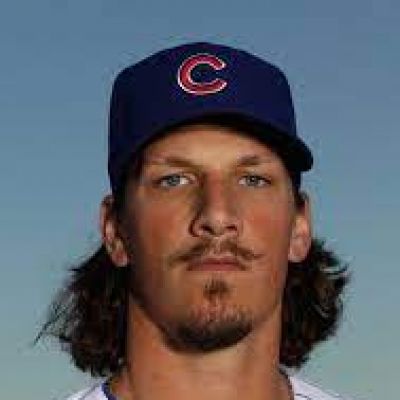 Who isJeff Samardzija? Jeff Samardzija is a 35-year-old baseball player. Jeffrey Alan Samardzija was born on January 23, 1985, in Merrillville, Indiana. His ancestors are from Serbia. Sam Samardzija, his father, was a professional hockey player who inspired him and his older brother to participate in sports. However, he must deal with the loss of his mother, Debora Samardzija’s early death. He grew up in Valparaiso, Indiana, with his younger brother, Sam Samardzija Jr., now his agent and Vice President of Wasserman Baseball. Samardzija lettered in football, basketball, and baseball as a child.

Similarly, when it comes to his ethnicity, he is of American origin and Serbian ancestry. In the 1940s, his grandparents moved to the United States. Similarly, during his time at Notre Dame, he was dubbed “Shark” by teammates. Moving on to Jeff Samardzija’s educational history, he was a letterman in football, basketball, and baseball at Valparaiso High School. He was also named the most valuable player on the football team twice. He was a first-team All-State selection for the baseball team. Jeff graduated from high school in 2003. He then earned an athletic scholarship to attend the University of Notre Dame. From 2003 to 2006, he was a member of the Notre Dame Fighting Irish football team at the university level. Similarly, from 2004 to 2006, he was a member of the Fighting Irish baseball team.

What is Jeff Samardzija’s Height? Jeff Samardzija, known as the “Shark of the Major League Baseball,” stands at a towering 6 feet and 5 inches tall. He is 109 kilograms in weight. In addition, he has brown eyes and brown hair. Aside from that, there is no detail about his body stats, shoe size, or anything else.

Jeff chose to focus on baseball despite his ability to play both football and baseball. He dropped out of the NFL Draft on January 19, 2007, and signed a five-year deal with the Chicago Cubs. On the same day, he was called to join the bullpen; he made his MLB debut on July 25th, 2008. He made a solid first impression by striking out the first batter he faced.

He was assigned to Triple-A Iowa Cubs in 2009 after missing the team’s spring training. In March 2010, he was re-acquired by the Cubs. Seasons 2011, 2012, and 2013 were all favorable for Jeff regarding breaking records. However, 2014 did not get off to a strong start. The Cubs also offered him a five-year, club-friendly contract with several option years, but he turned it down.

Jeff joined the San Francisco Giants on December 9, 2015, after finishing his contract with the Boston Red Sox. He won his first game as a Giant in April 2016, less than a year after joining the team. He also pitched his first Giant Shoutout, the third of his career the following year.

Similarly, he was named National League Player of the Week from August 28 to September 3, 2017. He was placed on the disabled list for the 2018 season due to a strained pectoral muscle.

Jeff Samardzija’s Income And Net Worth

How much is Jeff Samardzija’s Income? Despite being a fantastic player, Jeff’s career has been marked by a lack of notable accomplishments. The 34-year-old has a long way to go, but with his commitment to his profession, he will undoubtedly achieve several milestones.

Jeff has known himself as a brilliant athlete since he was a child. He has accumulated a net worth of $ 100 million as of today. He signed a five-year, $90 million deal with the San Francisco Giants on December 5, 2015.

Who is Jeff Samardzija’s Girlfriend? Jeff Samardzija may be single or in a relationship, depending on his persona. He has not, however, kept his private life hidden from the public eye and has not disclosed his current relationship status. Jeff, as committed to his work as he is, prefers to avoid distractions. He has, however, been photographed with women on the internet and in the press. He hasn’t said anything about her name, though. Jeff hasn’t married yet, and he doesn’t have any children. He still hasn’t shared any detail about his previous relationships. Jeff is rarely seen in public or in the papers, so no reports have been reported. He has maintained a clean reputation and avoided controversy in his professional and personal life.

Jeff Samardzija, unlike other actors, dislikes being in the spotlight. As a result, he isn’t very involved on social media.