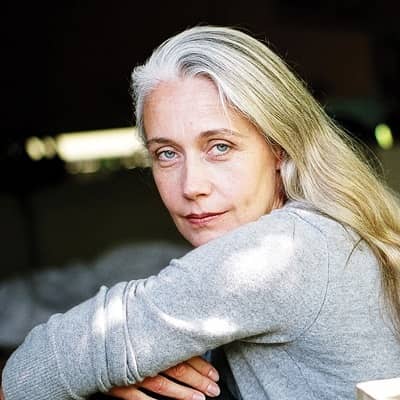 Helen Storey is a British fashion science professor at the University of the Arts, the co-director of The Helen Storey Foundation, and an artist, and a designer. Helen Storey has been the United Nations High Commissioner for Refugees’ first Artist in Residence in Za’atari Refugee Camp for seven years.

Helen Storey was born on August 16, 1959, and she is now 62 years old. Her birthplace is Rome, Lazio, Italy, and her zodiac sign is Leo. This individual attended Hampstead Comprehensive School in North London and graduated from Kingston Polytechnic in 1981 with a degree in Fashion.

Storey also trained in Rome with Valentino and Lancetti. This was prior to the launch of her own label in 1984. When it comes to her family, Storey’s father’s name is David Storey. Her father was a late playwright and novelist who died on March 27, 2017. Similarly, her mother, Barbara Rudd Hamilton, died in 2015. She, too, has three siblings.

There are no specifics about professor Helen Storey’s body measurements, such as her height, weight, chest-waist-hip measurements, dress size, and so on. Storey has hazel eyes and grey hair.

Helen Storey is well-known as an artist and designer. She is also a Professor of Fashion Science at London’s University of the Arts. Storey is also the co-director of The Helen Storey Foundation. She also serves as the UNHCR Designer in Residence at the Za’atari Refugee Camp. She works with others to develop innovative, artistic, and cultural livelihood projects for a better life. As of 2022, this individual has been working with UNHCR as the first Artist in Residence for seven years.

Between 1984 and 1995, this fashion icon established her name and was named “Most Innovative Designer” and “Best Designer Exporter” in 1990. Similarly, she was nominated for “British Designer of the Year” in 1990 and 1991. This person then designed the dress worn by singer Frances Ruffelle in 1994. Frances wore it when she represented the United Kingdom in the Eurovision Song Contest in 1994. The Helen Storey label ceased operations in 1995.

Following that, this individual wrote and published her autobiography, Fighting Fashion. Her personal experience in the industry was documented in this book. Furthermore, this book was published by Faber & Faber, and Sir Paul Smith described it as “at last the truth – a perfect and witty account of the life and British Fashion.”

Primitive Streak was founded in 1997 by Storey and her sister Kate Storey. Her sister is a developmental biologist, so it’s a science-art collaboration. This project consists of 27 dresses that depict 11 key embryonic moments that occur during the first 1000 hours of human life in textile form.

This project was initially funded by the Wellcome Trust. The exhibition first appeared in 1997 at London’s Institute of Contemporary Arts. It later toured seven countries. As a result, this project received two awards and was viewed by five million people.

The Closing Neural Tube Dress was commissioned in 2015 for the renovation of the Wellcome Collection Reading Room. Similarly, The Dark Lung Dress is currently housed in the National Museum of Scotland’s permanent textile collection.

Similarly, in 2012, she received the Condé Nast Traveler Award for “Best Design & Innovation” for the Catalytic Clothing Project in the Sustainability category, and in 2014, she was appointed Royal Designer for Industry at the Royal Society of the Arts. Storey also received an Honorary Fellowship of Arts at the University of Bournemouth in 2014.

Helen Storey’s Salary and Net Worth

Storey’s net worth is estimated to be around $3 million US dollars.

There is no information available about Professor Helen Storey’s relationship status or love affairs. This gifted individual is primarily concerned with advancing her professional career and collaborating with UNHCR to make the world a better place.

Helen joined Twitter in March 2011 and currently has over 4.5k followers on her @profhelenstorey account. Her Instagram handle is @dress4ourtime, and she has over 2.1k followers. Aside from these, the art professor does not appear to have any public profiles on other platforms.