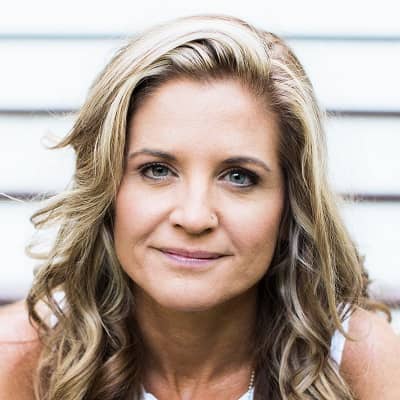 Glennon Doyle rose to international prominence as the author of the books Carry On, Warrior, Love Warrior, and Untamed.

When it comes to her family, her mother’s name is Patti. Her mother was a Spanish teacher who went on to work as a guidance counselor.

Similarly, her father’s name is Bubba Doyle. Her father works as both a middle school principal and a high school football coach. She also has a sister named Amanda Doyle.

In terms of her educational background, Doyle earned a Bachelor of Arts degree from James Madison University in 1998.

This personality was a member of the Sigma Kappa sorority, Delta Rho chapter, throughout her undergraduate years. Doyle went on to teach in Northern Virginia after graduating from college.

Glennon Doyle is around 1.67 meters (5 feet 5 inches) tall and weighs approximately 121.5 lbs (55 kg). Doyle has hazel eyes and blonde hair. Aside from these, no additional information about this author’s bodily measurements is available.

Doyle is a well-known author in his field. She is also an activist known for her New York Times best-selling novels Untamed, Love Warrior, and Carry On, Warrior. People also know her as the developer of the online community Momastery.

Doyle also serves as the president and founder of Together Rising. It is a nonprofit organization headed entirely by women that assists women, families, and children in need.

Furthermore, this personality frequently writes and speaks about her early difficulties with bulimia and addiction. Doyle recounted her time as a teen in a psychiatric hospital in her 2013 TEDx lecture Lessons from the Mental Hospital.

Similarly, this personality began writing online with her blog “Momastery” in 2009. Then, in 2013, she wrote her memoir Carry On, Warrior. It was inspired by several of her most popular blog pieces.

This personality finished her third memoir, Untamed, in 2020. This book was also chosen to be a part of Reese Witherspoon’s Reese’s Book Club in April of the same year.

Her three books are all best-sellers. Her novel, Untamed, had sold over two million copies as of February 2021. J. J. Abrams’ production company is developing a TV series based on this book.

Furthermore, in 2014, Parents magazine recognized this writer and Momastery as the winner of its “Best All-Around at Social Media” award.

Furthermore, this individual is listed on Oprah’s SuperSoul 100. It is a group of 100 awakened leaders who use their voices and talents to help humanity. This author was recently named to the Fast Company Queer 50 list in 2021.

Glennon Doyle’s Salary and Net Worth

This well-known novelist has amassed a sizable fortune over the course of her career. Moving ahead, this author has a net worth of approximately $5 million USD.

Glennon Doyle has a happy marriage. Abby Wambach, a retired soccer player and coach who is a member of the National Soccer Hall of Fame, is her wife.

The couple met on a book tour and married on May 14, 2017. In November 2016, the author revealed her relationship with Wambach.

In 2021, the couple relocated from Naples to Hermosa Beach following their marriage. The couple bought a $6.5 million property there.

Doyle was formerly married to Craig Melton from 2002 to 2016. Her ex-husband used to be a model. She has three children with Melton. Tish and Chase Melton are the names of two of her children.

Glennon Doyle began using Twitter in August 2009 and currently has over 301.6K followers on her @GlennonDoyle account.

Similarly, she has over 1.9 million Instagram followers under the handle @glennondoyle. She also has over 953K followers on her Facebook page.