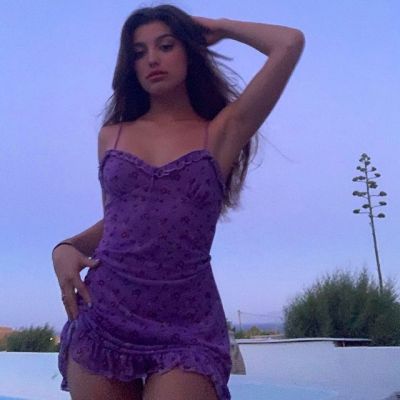 Gabriella Whited was born in San Francisco, California, to Robert and Rossana Whited on June 16, 2001. Her zodiac sign is Gemini, and she will turn 19 in 2020. Francesca Whited, her younger sister, has played the role of Mozart in several of her YouTube videos. Gabriella moved to Los Angeles when she was 15 years old.

Gabriella began her career in the entertainment industry at a young age. She was enthralled by a stage production of the famous musical “The Sound of Music” and gained an interest in acting as a result. She wanted to pursue her passion and enrolled in classes at San Francisco’s ‘American Conservatory Theater.’ She also began taking dance lessons the same year.

She was also a gymnast when she was younger. She soon began performing in various stage productions and dance competitions. In 2011, she performed a dance piece in the production of “Willy Wonka,” and in 2012, she starred in “Beauty and the Beast.”

Gabriella’s first commercial was when she was 13 years old. After that, she appeared in the documentary drama–adventure film ‘Ty’s List,’ which was released in 2014. Ben Prawer and Jesse Swedlund directed the film. Gabriella rose to prominence after starring as ‘Brittany Starr’ in the 2015 short film ‘The Troupe.’

On March 31, 2015, Gabriella released her self-titled lifestyle channel on YouTube. Her first video, a tutorial titled “HOW TO GET YOUR AERIAL IN ONE-DAY,” which she posted on the channel on November 22, 2015, has received over 2.8 million views. Her videos gradually expanded to include a wide variety of subjects, including dance, gymnastics, exercise, wellness, and beauty.

‘Intense Ab Workout (Flat Tummy in 1 WEEK) 5 Minute Fat Burn’ has become her channel’s most successful video to date. It was first published on May 6, 2018, and has received over 6.1 million views since then. Several other videos on the site have received millions of views.

‘GET RID OF BACK FAT IN 1 WEEK (INTENSE WORKOUT),’ ‘TINY WAIST WORKOUT (1 WEEK RESULTS!) SHAPE YOUR TUMMY,’ and ‘ABS & FLAT BELLY WORKOUT (Get Rid of LOWER BELLY FAT)’ are a few of them. More than a million people have subscribed to the website, and it has over a million views.

Gabriella began writing her own songs in 2018, inspired by her online fans and followers. She’s filmed a lot of them and shared them with her fans online. ‘Bad Reasons,’ ‘I Keep Fallin,’ and ‘Number On My Phone,’ to name a few. Her songs are available on her ‘YouTube’ channel as well as on ‘Spotify.’

The stunning diva, who has an enviably toned body and striking features, is also well-known on ‘Instagram,’ where she has amassed hundreds of thousands of followers.

Gabriella, on the other hand, has kept a low profile. She has never been involved in any kind of gossip or controversy.

Gabriella Whited stands 5 feet 3 inches tall, according to her body measurements. Her body is shaped like a peach. She also weighs about 53 kilograms (116.6lbs). Her chest, waist, and hip measurements are 35-24-35 inches. Similarly, she wears a size 5 shoe (UK). Additionally, she has dark hair and brown eyes. She has an enthralling and audacious personality.

Gabriella is well-known on social media. Her Instagram account has amassed a following of over 249k people. She’s still on Twitter, where she has over 2,000 followers. Her self-titled YouTube channel, meanwhile, has more than 1.36 million subscribers. Her official Facebook page now has over 2,000 fans.

As a well-known social media star, she undoubtedly earns a substantial sum of money from her work. Her social media activities, as well as her acting career, maybe her primary source of income. Her net worth, on the other hand, is between $1 million and $5 million.