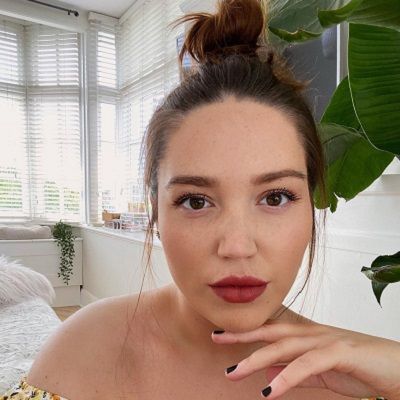 Gabriella Lindley was born in Sheffield, England on June 1st, 1994. However, she later relocated to London. She is 26 years old and was born under the sign of Gemini. Her mother’s name is also Jane. She majored in musical theatre at Wakefield College, where she garnered numerous honors. Gabriella is the owner of a cat. In addition, her favorite show is ‘Pretty Little Liars,’ and she enjoys listening to One Direction.

Gabriella Lindley began uploading videos to her main channel,’velvetgh0st,’ in 2013. Her films first focused on beauty and glamour before she began to include personal stuff. Her themes of discussion were favorably received by her audience. Her following base quickly developed, and she quickly became one of the most popular vloggers in the UK.In 2015, she was signed by McDonald’s, along with Oli White, to help create its youth-targeted channel, ‘Channel Us,’ which was an effort to engage with a younger market. Gabby announced a collaboration with Primark, a discount high-street fashion company, later in the year.

Gabbie’s style and sensibilities were replicated in the homeware collection, which comprised pastel-colored bedding, sequined pillows and lighting, triangular patterns, and rose gold tones. As a result, she visited the Sheffield Meadowhall Primark store to promote the products and interact with her followers. This new line was a huge success, and the collaboration blossomed into a long-term relationship.

Similarly, Gabby collaborated with Primark to launch a new stationery collection in 2016. This range comprised pastel-colored pencils, pencil cases, notebooks, and pens. Gabbie also vowed to become more intimate and honest in her vlogs in 2016.She said that her substantial weight loss was the result of a series of procedures. Several images of her as a child revealed that she was overweight as a child, which harmed her self-esteem. In her situation, operations were a remedial solution that enabled her to restore the confidence she needed to live a regular life.

She admitted to undergoing multiple “life-changing” surgical procedures, including a breast uplift and liposuction. Because of these revelations, she became the object of unfavorable comments and opinions, which harmed her popularity. Gabbie, on the other hand, opted to be upfront about her personal life and revealed that she is bisexual.

Gabbie, in addition to being a social media sensation, is a trained vocalist who was a member of her school’s chorus. She was even awarded the Eileen Diamond Memorial Trophy as the most promising singer. She is still sharing her love of music by recording and posting renditions of her favorite tunes. Gabriella currently has another YouTube channel called ‘Planet Gabb,’ where she posts vlogs about her personal life. She maintains her presence on both channels.

Lindley’s squabble and subsequent split with fellow YouTube star Zoella is well-known. They were close friends who had appeared in a number of videos that were well-liked by their followers. However, Zoella’s absence from Gabbie’s videos raised the possibility that the two aren’t talking to each other.The rift was allegedly created by Gabbie’s sarcastic comments criticizing the app ‘Vessel.’ Gabbie has blocked some people on Twitter whose views on ‘Vessel’ differed from hers. Later, in her vlog titled ‘Honesty,’ she voiced her dissatisfaction with the squabble she had with Zoe, saying she regretted not maintaining their connection.

She also stated that she was immature at the time and that she would now unblock anyone who asked her to. Many bloggers, however, continue to view Gabbie in a negative light due to her continual squabbles with other YouTubers and her alleged promotion of unhealthy weight-loss surgery.

In terms of her personal life, she has admitted to being bisexual and being attracted to both men and women. There is no information available about her relationships. She may have dated someone previously, but she has not disclosed it. She is currently single and enjoying her single life to the best.

Gabriella has undergone up to six different surgical procedures in the last 18 months in order to obtain the ‘ideal physique.’ She is a spectacle wearer. She has not, however, revealed her bodily measurements to the public. Her eyes are hazel, and her hair is brown. She also frequently wears spectacles.

Her second YouTube channel, ‘Gabriella Lindley,’ has 484K subscribers. She’s also active on TikTok, where she has over 8K followers and 7K likes. We may contact him via his Gmail account, [email protected], for commercial inquiries.This YouTube sensation may have amassed a sizable fortune as a result of her work. Her YouTube channel may earn her a decent living. She does, however, have a net worth of roughly $102K.