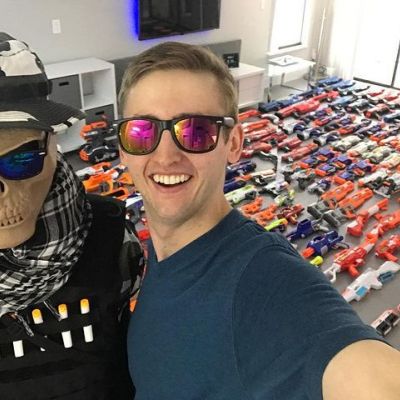 Frank Cooper is a 29-year-old actor who was born on July 26, 1991. He was born and raised in Columbus, Ohio, and later moved to Fort Myers, Florida. Leo is his zodiac sign. Frank has a nephew, according to the only information available about his family. Apart from that, little is known about his parents, siblings, or other family members. He also has two pet cats, and one of them was the subject of his first Instagram post.

Frank Cooper has yet to provide any useful knowledge about his educational background. Frank, on the other hand, would have finished university education at his age if he hadn’t wanted to take a break or stop his education to concentrate more on his professional career.

Frank Cooper is a social media celebrity for a living. He is mainly a Youtube content creator who specializes in Nerf blaster play and modification. He is well-known for his YouTube channel “Coop772.” This channel is dedicated to the art of foam flinging. He posts everything from silly skit videos to product reviews and everything in between.

Furthermore, since 2007, Frank has been changing Nerf blasters he has been playing with since he was a young child. In addition to Nerf weapons, Frank Cooper enjoys tennis and golf, as well as photography, film, and other creative endeavors. In April of 2017, Frank and fellow nerf gun enthusiast LordDraconical attended a YouTube Star Meet & Greet.

“[MOD] The Dahmer – Nerf Rapidfirestrike / Swarmfire Integration” was his first video to exceed 10 million views. With over 12 million views, this video is the most popular on his channel right now.

In addition, his main channel has more than 1.3 million viewers and 715 million views. [MOD] Big Blast Modification – Magazine Fed is the most recent video on this site. He originally posted this video on January 29, 2010, and it currently has over 94.6k views.

Frank Cooper also has a YouTube channel of the same name. This secondary channel, which was launched on April 14, 2014, has amassed over 4.65 million views and 84.4 thousand subscribers. Furthermore, Frank uploads a variety of videos to this website, many of which do not include Nerf blasters. Smooth-Cast 65D Example is the most recent video on this channel. This video was made on June 24, 2014, and it has received over 26.8k views to date.

EXPLANATION OF RECENT PHYSICAL CHANGES | WHY I’M FAT is Frank’s most popular video on his secondary page. Since September 22, 2019, this video has received over 578k views. As of July 2020, this is also the last video posted to this website. Why I don’t like banana magazines in Nerf, Why is the Crossbow so Expensive?, and My Hasbro Wishlist – What I Want to See are some of the other videos with over 250k views.

Frank, on the other hand, hasn’t said anything about the situation. Frank has often avoided posting anything on social media that could hint at his current relationships or affairs.

Furthermore, Frank Cooper has kept a clean public image free of rumors, scandals, and controversies that might jeopardize his professional and personal lives. Nonetheless, Frank Cooper’s elegance, talent, humor, and charms will undoubtedly attract many lovers in the future.

Frank Cooper’s Instagram handle is @coop772 when it comes to his social media presence. At the time of writing this biography, his account had 218 post shares and 41.7k followers. Furthermore, on July 6, 2007, Frank launched his main channel, “Coop772.” This channel has received 715 million views and 1.31 million subscribers since then.

Frank Cooper also has a separate YouTube channel of the same name. On April 14, 2014, he posted this, which has received over 4.65 million views and 84.4K subscribers.

Frank Cooper’s net worth is estimated to be between $1 million and $5 million dollars. His main Youtube channel has a net worth of $949,000 dollars on its own. Frank has over 780 videos on YouTube, with a total of more than 715 million views. Every month, Frank Cooper produces four new videos, resulting in 677k video views and 952 new subscribers.

Frank has also released over 50 videos with a total of over 4.6 million views. In the last few months, Frank Cooper hasn’t made any new videos. Despite this, every day he receives 3.3k video views and 30 new subscribers.