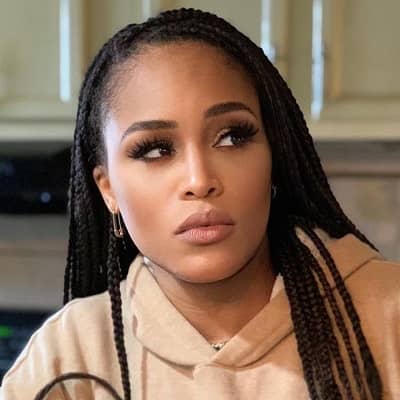 Eve is a rapper and actress best known for collaborating with Gwen Stefani on the Grammy-winning song “Let Me Blow Ya Mind.” When Eve’s first No. 1 album was released in 1999, she was barely out of her teens. By 2002, she had two additional hit albums under her belt and had won a Grammy.

Eve had a tough childhood. Eve Jihan Jeffers was born in a Philadelphia housing project on November 10, 1978, and is now 42 years old. Julie’s parents, Julie and Jerry, ran a publishing company and a chemical plant, respectively. When Eve was 12 years old, her parents divorced. She hadn’t heard from her father in a long time. Aside from that, there isn’t much information regarding Eve’s siblings or her early years.

During her time at Martin Luther King High School, she excelled at poetry. Before transitioning to hip hop at the age of 13, Eve was a gifted artist and a fixture on the juvenile talent show circuit. Edjp was a short-lived rap combo she founded with her friend Jennifer Pardue.

Eve traveled to New York after graduating from high school but ended up as a stripper. She decided to pursue a music career after becoming dissatisfied with her circumstances at the age of 18 and received a break. Eve of Destruction was signed to Aftermath Entertainment by Dr. Dre. She was, however, let go after only a few months. A song she wrote for the label, however, was featured on the soundtrack of the 1998 film Bulworth. It was her first major accomplishment. Dre’s parent firm, Interscope, introduced Eve to the Ruff Ryders label, which signed her and worked hard to prepare her for the big time.

When Eve’s single “What Ya Want” topped the Billboard Top 40 in 1999, Ruff Ryders’ faith in her was rewarded. Let There Be Eve…, her debut album, landed at No. 1 in its first week of release in September. Eve joined Lauryn Hill and Foxy Brown as the only female hip-hop artists to have an album debut at No. 1 (after Lauryn Hill and Foxy Brown). Eve’s second album, Scorpion, was released in March 2001 and went on to sell 1.5 million copies. The album’s lead track, “Who’s That Girl?” catapulted her to international fame. The second hit, “Let Me Blow Ya Mind,” a duet with Gwen Stefani produced by Dr. Dre, earned a Grammy in 2002. Her third album, Eve-Olution, was declared gold the same year. “Gangsta Lovin’,” her collaboration with Alicia Keys, reached No. 2 on the Billboard Hot 100.Eve made her acting debut in Vin Diesel’s action-adventure flick xXx in 2002. She appeared alongside Ice Cube in the smash comedy Barbershop. Eve reprised her role in the film’s two sequels, which were released in 2004 and 2016. In 2003, she starred in the UPN comedy series Eve.

The Most Recent Year

Following Eve-Olution, Jeffers largely limited herself to cameo appearances on the albums of other musicians like Amerie, Kelly Rowland, and Ludacris. She recorded two songs in 2007, “Tambourine” and “Give It to You,” but her fourth album failed to chart as expected. Interscope and Eve had a falling out, and Eve left the label in 2010. She was ultimately able to self-publish Lip Lock. Revenues, on the other hand, were disappointing.

Eve has won a Grammy, a BET Award, a Teen Choice Award, and an MTV Video Music Award, among others. She co-hosted the American chat show “The Talk” from 2017 to 2020. On VH1’s list of the 50 Greatest Hip Hop Artists, she was rated 46th.

Eve enjoys a solid salary from her professional career as a singer, musician, actress, and TV program host. Eve began her professional music career when she was 20 years old, and she has since ascended to become one of Hollywood’s most well-known singers and actresses.

She has won numerous awards and accolades, including the Grammy Award. Her earnings are definitely derived from her albums, films, series, and television appearances. Eve’s net worth is estimated to be around $10 million as a result of her years of hard work. Sponsorship arrangements with well-known businesses like Pepsi, Clarica, and Sprite have helped her make money.

Eve is a happily married woman. Maximillion Cooper is rumored to be her husband. Cooper is a successful American businessman. The couple started dating in 2010, and on December 25, 2013, they got engaged. The pair married in Ibiza, Spain, on June 14, 2014. The couple has no children due to Eve’s infertility. Cooper’s previous relationship with entrepreneur Julie Brangstrup resulted in four stepchildren for her. Eve and her family are now living a happy life. Her job requires her to go to London, Los Angeles, and New York.

Eve has a contentious connection with Foxy Brown, a New York City rapper with whom she has been embroiled in a number of incidents. Eve and Foxy Brown, a rapper from New York City, began a fight in 1999 over Brown’s alleged affair with Eve’s old mentor DMX.

Eve is a lovely woman with an hourglass figure. She stands 5 feet 7 inches tall and weighs around 60 kilograms. Her physical measurements are 34-23-35 inches, and she wears a 34B bra and a size 6 shoe (US). Her skin is fair, and she has black hair and blue eyes. She has two tattoos of dog paws on her chest.