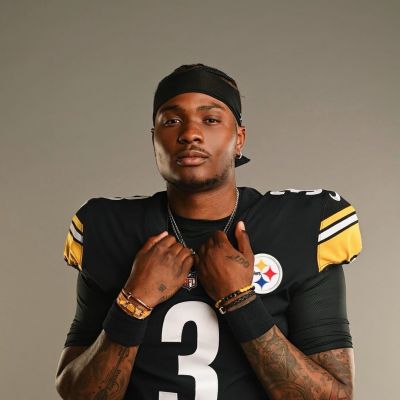 Dwayne Haskins is a professional American football quarterback who was demoted for breaking the Covid-19 policy twice.

Tamia Haskins is Haskins’ younger sister. She is four years his junior, and they both went to the same high school. His best friend is Haskins’ sister, who is an actress.

Haskins attended numerous camps as a child. Later, with his father, he would concentrate on exercises mostly to avoid pocket pressure.

Haskins took part in the USA vs. World game in Ohio in 2011. Despite being an 8th student during the game, Haskins amazed everyone with his attention to detail.

The professional football player was born in 1997, making him 25 years old in 2022. As we all know, the bodily strength of American football players varies. Haskins shed 11 pounds and 7 per cent body fat over the 2020 offseason, compared to his pre-draft measurements.

Haskins worked out with Bullis School quarterback coach Quincy Avery in preparation for the NFL draft. He used to train for six hours four days a week.

Haskins used to spend the first two hours of practice throwing with footwork drills and the next two hours lifting and doing agility training. Haskins was the 15th pick in the first round of the 2019 NFL Draft by the Washington Redskins.

Although Washington unofficially retired jersey number 7 in honour of Joe Theismann, Haskins was given the number after requesting it.

In Week 4, Haskins made his NFL debut against the New York Giants. Despite his 107 passing yards and three interceptions, the Giants defeated Washington 24-3.

Later that week, in a 24-9 loss to the Buffalo Bills, Haskins made his first start for Washington. Haskins earned his first win as a starter in week 12 as Washington defeated the Detroit Lions 19-16. Haskins was selected as one of Washington’s team captains and starters for the 2020 season.

Before the game against the New York Giants in October, Haskins violated the league’s Covid protocol for the first time. He invited a family member to join him at the team hotel in New York. Washinton later penalized him $4,833 for violating protocol. As a result, Haskins was benched and remained a backup until the 14th week of the season.

After a protocol violation, Haskins was able to play for the first time in a game against the San Francisco 49ers. He came on as a replacement for the injured Alex Smith.

Later, Haskins started the following game against the Seattle Sea Hawks. Haskins passed for 295 yards, one touchdown, and two interceptions.

Haskins did not wear a mask to Cousin’s (girlfriend’s) birthday party in December. Another Covid-19 protocol violation resulted from the party photograph. Haskins was then fined $40,000 and stripped of his captaincy for violating protocol once more.

But he didn’t play in the next game until the fourth quarter when he was benched. He completed 14 throws for 154 yards and two interceptions.

After consulting with both parties, Washington decided to release Haskins before the conclusion of the second year. On January 21, 2021, Haskins signed a future contract with another NFL franchise, the Pittsburgh Steelers.

Dwayne Haskins’s Salary and Net Worth

After being picked, Haskins received a $14 million guaranteed deal with Washington. According to Spotrac, Haskins made between $8.9 million and $1.15 million in his rookie season.

However, Haskins is still being paid his remaining salary after being fired by Washington. Similarly, Haskins signed a one-year, $2.3 million non-guaranteed contract with the Steelers and played the rest of the season. On April 24, 2019, Nike struck an endorsement agreement with Haskins to represent the Jordan brand.

Haskins’ apparel line is called the Kingdom of Pride. In 2019, he debuted his brand. He has also published hoodies, sweatshirts, sweat shorts, t-shirts, beanies, and headgear.

It is also alleged that the football player bought a $750k property for his mother. Similarly, he gave himself a million-dollar automobile, the Bentley Bentayga.

Dwayne Haskins is blissfully wedded to his lovely girlfriend, Kalabrya Gondrezick, in his personal life. The pair made their engagement official on social media.

Unfortunately, nothing is known about Dwayne and Kalabrya’s relationship, such as how and when they met and began dating. According to sources, Dwayne got down on one knee and proposed to Gondrezick in a Las Vegas restaurant.

After a few years of dating, Dwayne and Kalabrya decided to marry. They plan to marry in March 2021. The wedding took place in Vegas, and only a few close friends and family members attended the event. There were rumours in the media about Dwane and Kalabrya’s children. However, the spouses have not yet become parents, and there has been no word on Kalabrya’s pregnancy announcement.