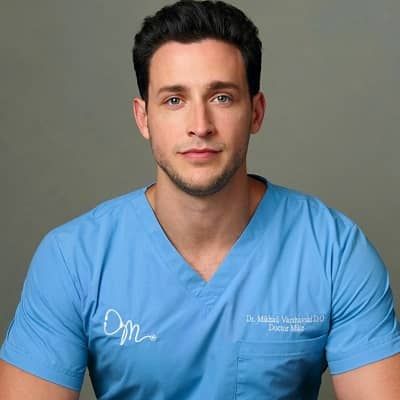 Dr. Mike is a doctor who rose to prominence online through his self-titled YouTube channel, where he broadcasts videos about health and pop culture. Dr. Mike’s YouTube channel has over 6.42 million followers. Similarly, he was awarded the Sexiest Doctor Alive in People Magazine’s 2015 Sexiest Man Alive issue.

Who is Dr. Mike? Mike, the doctor, is 31 years old. He was born in Saransk, Soviet Union, on November 12, 1989. Mikhail Varshavski is his full name. He is of Jewish ancestry and of American nationality.

Similarly, his father was a physician, and his mother was a mathematics professor. At the age of five, he and his parents moved to Brooklyn, New York City, USA. After migrating to Brooklyn, his father had to attend medical school because his degree from the Soviet Union was not recognized in the United States, and his mother found a job sweeping floors. He also has an older sister, Dasha, and three nephews, Daniel, Steven, and Ari.

He grew up with his siblings, despite his family’s financial difficulties. The family used to live in a one-bedroom apartment, struggling to make ends meet. Buying a bag of chips was also difficult for him since he had to haggle with his parents even for a quarter. He chose to become a Doctor of Osteopathic Medicine (DO) at a young age.

As he progressed through high school, his classmates began to refer to him as ‘Dr. Mike,’ and they came to him with sports-related ailments since they knew his father was a physician. After graduating from high school, he attended the ‘New York Institute of Technology,’ where he earned a bachelor’s degree in biological sciences. He even completed a seven-year accelerated program in a medical school to obtain a professional doctorate.

While studying, he traveled to Israel with several of his buddies. On one particular night, he chose to spend the night in the desert with his buddies, near the Bedouin monks’ encampment. Due to his anxiety and lack of sleep, he began exploring beyond the campsite, only to be forced back since the locals did not appreciate his gesture.

During his first year of medical school, his mother died of leukemia. He was living alone at the time and returned to his father’s house to assist him to cope with the loss. His father’s early hardships and eventual success pushed him to pursue his dreams. His nephews, Steve, Dan, and Ari, are very close to him. He even included his nephews in a YouTube video titled ‘Kids Ask Awkward Health Questions’ on January 27, 2019.

What is Dr. Mike’s Height? Dr. Mike is 6 feet 2 inches tall, or 191 meters. His additional body stats are currently unavailable. He has a gorgeous tall personality that has drawn a large number of fans and followers on his social media profiles. Similarly, he has black hair and green eyes.

Dr. Mike is an internet-famous family medicine doctor who was born in Russia. His Instagram account went “viral” when he was featured in Buzzfeed and People magazine’s 2015 issue of The Sexiest Doctor Alive. He also has a YouTube channel dedicated to medical-themed entertainment.

Similarly, he began his residency studies and internship at ‘Overlook Medical Center’ at first. Then, in Chatham, New Jersey, he joined the ‘Atlantic Health System’ and began practicing family medicine (FM). As a physician, he believes in preventative treatment and educates his patients on simple lifestyle modifications that may have a significant influence in the long term.

On his social media platforms, he has even begun to share information on the benefits of osteopathic treatment and beneficial lifestyle choices. In 2015, ‘Buzzfeed’ released a story about him, which enhanced his reputation. ‘People’ magazine named him the ‘Sexiest Doctor Alive’ in November 2015.

Mike became a social media phenomenon after receiving exposure from a well-known publication. His Instagram account, which he started in 2012 to document his life as a doctor, quickly became global. Following that, he used his social media prominence to aid others, particularly children. He founded ‘Limitless Tomorrow’ in late 2015 to grant scholarships to students.

He created his self-titled YouTube channel on August 18, 2016, to inspire, encourage, and counsel his fans and followers. He even released videos about how to reduce cancer risks and stress. As a result, he was invited to appear as a guest on a variety of ‘ABC’ network television programs, including ‘Nightline’ and ‘Good Morning America.’ He has also been on major discussion shows such as ‘The Doctors,’ ‘The Rachel Ray Show,’ and ‘Today.’

In one of the interviews, he stated that the bond he has with his patients is what he enjoys most about being a doctor. In addition, while executing his duties as a doctor, he is happy to have amassed millions of followers across social media platforms. He remarked that he was pleased to debunk the myth that in order to be successful in medicine, one must forego one’s social life and interests. And, for the time being, he has set a wonderful example by having millions of followers on her social media profiles.

During a trip to Israel in July 2019, he raised awareness for the humanitarian charity Save a Child’s Heart by posting a photo with the organization’s 5,000th patient. In March of 2020, he donated $50,000 worth of N95 masks in response to medical personnel shortages caused by the COVID-19 epidemic.

Dr. Mike believes in giving back to society via charity and other humanitarian endeavors. He routinely raises funds for philanthropic organizations using his social media channels. He had even shaved his head in favor of the ‘St. Baldrick’s Children’s Cancer Organization.’ Then he encouraged his followers to give money and promised to match the largest gift made via Instagram, Twitter, and Facebook. He even creates motivational and encouraging tweets for his admirers and followers.

How much is Dr. Mike’s Income? Varshavski has also been nominated for social media celebrity. Dr. Mike was also nominated for a Shorty Award in the category of Health and Wellness in 2018. He was nominated for ‘Breakout YouTuber of the Year’ at the 10th ‘Annual Shorty Awards’ in 2019. Similarly, he received the 2020 Webby Awards for Education & Discovery, as well as Health & Fitness in the Social category.

In terms of wages, he is a doctor as well as a social media figure who has amassed a sizable fortune. He has a successful YouTube channel and a net worth of around $2 million.

Who is Dr. Mike’s Girlfriend? Dr. Mike is most likely single right now. In terms of her previous relationships, he was in a relationship with model and actress Pia Alonzo Wurtzbach, who was named ‘Miss Universe 2015’. Mike began dating Fox news reporter Jennifer Lahmers after parting up with her. In one of the interviews, he stated that he does not believe in falling in love with someone only because of their beauty.

On a personal level, he is a fitness fanatic who frequently starts his day with a run with his favorite dog Roxy. He even enjoys participating in sports with his coworkers, such as tennis and basketball. He also holds a black belt in Taekwondo, a Korean martial art. In addition, he owns a husky named Roxy.