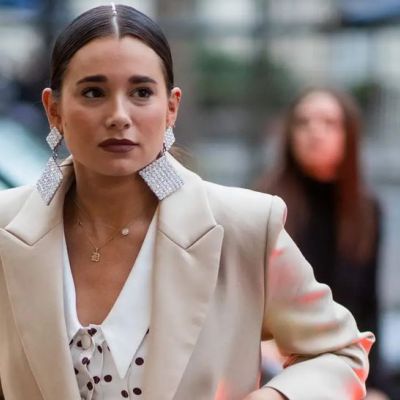 Danielle Bernstein is a well-known American fashion designer and the founder of the WeWoreWhat fashion blog and company. She founded the company while a sophomore in college. She has also collaborated with a number of brands and developed her own fashion lines. Again and again, she has been accused of stealing designs and threatening small business owners who attempted to fight back.

Danielle was born on May 28, 1992, in Great Neck, New York, in the United States of America. He was born as Danielle Bernstein by her parents, the identities of whom she has not divulged. She has also not revealed any of her family members.

She was educated at many schools during her childhood. She began her education at William A. Shine Great Neck South High School. He temporarily attended the University of Wisconsin-Madison, where she majored in retail.

Danielle eventually relocated to New York City’s Fashion Institute of Technology, where she dropped out to devote more attention to her blog and convert it become a job.

Danielle Bernstein began her career in 2011 as a street-style photographer for the WeWoreWhat. Though she had no idea it would become a success, it did and earned a lot of fame in a short amount of time. As a result, it evolved into her personal style blog.

In 2016, she introduced a direct-to-consumer brand of overalls called Second Skin Overalls, which quickly became popular. As a result of her fame, she was named to the Forbes 30 Under 30 list when she was just 24 years old.

Following her success and popularity, she collaborated with the New York-based clothing label Onia to design swimwear. That summer, her swimwear was the best-selling suit and was only available at intermix. Following her success, she started her own swimwear brand, using Onia as a partner.

She also developed a new kind of jeans called the Danielle Jean, which she created by collaborating with the denim business Joe’s Jeans. She later founded Moe Assist, a technology startup, in 2019.

Danielle is a single woman. However, she is believed to have a boyfriend whose name has not been published, but he is a chef in the making, according to the fashionista’s Instagram.

She released a slideshow of herself and her beau spending quality time in the kitchen in mid-2021. Bernstein couldn’t help but drop a love peck on his cheek despite the fact that the two were dressed in cooking aprons.

Danielle explains that she fell in love with a chef in coaching after seeing a collection of beautiful images. Danielle currently does not have any children.

Danielle Bernstein, a fashion designer, has had several accomplishments in her career, including the launching of various clothing lines that have been a huge success.

Danielle Bernstein’s Salary and Net Worth

Danielle Bernstein’s net worth is projected to be $15 million as of June 2022. This is due to the billions she has amassed as a result of her successful job as a fashion designer. She owns various clothing lines that have sold well, owing to her considerable net worth.

Her love of fashion has always driven her to pursue what she is passionate about. Danielle worked with various businesses, which helped her gain public recognition. Following this, she capitalized on her notoriety by launching her namesake brand, which set a record sale of $1 million in 2 hours.