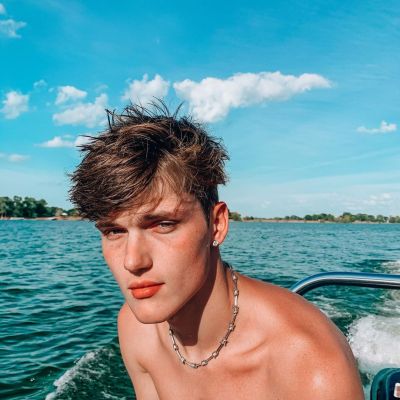 Dalton Kirkley was born on December 11, 2003, and in the year 2020, he will turn 17 years old. His zodiac sign is Sagittarius, and he was born in Vicksburg, Mississippi. When it comes to his friends, Dalton has a video on his TikTok channel that features his aunt.

Dalton, too, has two younger cousins. Katie is one of them, as seen in Dalton’s YouTube video WHO KNOWS ME BETTER!?!?/DailyDalton. Apart from that, he has remained tight-lipped about his parents, siblings, and other family members. Furthermore, Dalton has yet to reveal details about his educational background.

Dalton Kirkley is a young social media celebrity who works in the entertainment industry. He is best known for his comedy performances. Dalton also makes videos for the TikTok video-sharing website. His @Daltonkirkley account has more than 1.4 million followers.

Dalton was also a baseball player in his younger years. Similarly, he used to go by the handle @Daltonleekirkley on TikTok before changing it to @Daltonkirkley. Dalton can also be found on the Snapchat website under the handle @goat.storys.Dalton has signed a management contract with Henson Management. On his Instagram account @daltonkirkley, the young actor also posts comedic videos. Over 80,000 people have followed this account.

Dalton is also linked to Blake Gray, Mark Thomas, Cody Orlove, and Zoe LaVerne, all of whom are Instagram and TikTok stars. Dalton has also appeared in a number of advertisements, in addition to his massive social media following.Dalton has included a number of other social media stars in his Instagram posts. @tylerashtonn (Tyler Ashtonn), @olivermoy (Oliver Moy), @ cadenoutlaw_ (Caden Outlaw), @marcgomeezzz (Marc Gomez), and @jeremyhutchins are a few of these people (JEREMY HUTCHINS).

While writing this biography, Dalton posted exactly 25 videos on YouTube. Q and a!!!!!!! is the oldest video on the channel. And what about stupidity? He posted this video on August 28, 2016, and it currently has over 1.4k views.HUNTING FOR THE DEMOGORGON FROM STRANGER THINGS… is the title of the video with the most views (we found him). Since its release on December 10, 2017, this video has received over 16k views.

Other videos on Dalton’s Youtube channel with over 5k views while writing this biography include HOW TO GET 1000’S OF VIEWS ON SNAPCHAT (NOT CLICKBAIT), which has received over 8k views since its upload on May 22, 2017, and EXTREME SMASH OR PASS CHALLENGE! Since July 9, 2017, (BABY ARIEL, LISA, AND LENA, ETC) has received over 6.8k views.

This channel’s most recent video, titled submit this to your crush without a reason AT ALL, was posted on March 28, 2018. It’s a 30-second short video clip.

There is no checked information about Dalton Kirkley’s personal life or affairs. Young Dalton may be in a romantic relationship or single and concentrating on his studies and career at such a young age. Dalton has also maintained a low profile, avoiding any rumors, controversies, or scandals that could jeopardize his career and personal life.

Dalton Kirkley revealed his height in a video from 2016 in which he said that he was 5 feet 5 inches tall. However, Dalton’s body measurements are likely to have improved in the last four years. With age, he has become taller and more attractive, with attractive body features. Furthermore, Dalton has captivating hazel eyes and dirty brown hair.

In terms of his social media presence, Dalton Kirkley can be found on Instagram under the handle @daltonkirkley. At the time of writing this biography, Dalton had over 84.9k followers on this website and had shared 254 posts. He also has a separate Instagram account called @daltonkirkleybackup. As of December 2020, this account had 26 posts shared and over 2k followers.

He was also active on Twitter under the handle @daltonLkirkley, but this account is currently inactive. On August 28, 2016, he launched his YouTube channel “Dalton Kirkley.” This channel has over 64k views and 2.59k subscribers so far. His Youtube channel is still growing, and at the time of writing this biography, he had only 25 videos on it.

On his @daltonkirkley Tiktok account, he has more than 1.6 million followers and more than 50.5 million likes. Dalton can also be found on Snapchat under the handle @ goat.stories. For more details, we can reach out to him at [email protected] His earnings aren’t publicly accessible.