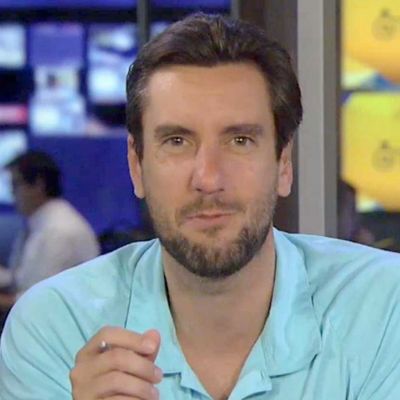 Clay Travis is an American sports journalist, writer, and television analyst who hosts a morning radio show on Fox Sports Radio. He also appears on the daily sports betting show Lock It In on FS1.

Richard Clay Travis was born on April 6, 1979, in Nashville, Tennessee. In the year 1997, he graduated from the Martin Luther King Magnet at Pearl High School.

Travis later attended George Washington University, where he majored in history in 2001. He was the student basketball manager while in college. Travis also attended and graduated from Vanderbilt University Law School in 2004.

Clay Travis began his legal career in the US Virgin Islands in 2004. At the same time, his personal blog garnered media attention. He is a huge Tennessee Titans fan, but he couldn’t get the satellite package to watch the game in his hometown, so he went on a “pudding strike,” eating only pudding for over fifty days. His efforts to persuade DirecTV to sell packages in his city were futile. He did, however, blog about his experience, which drew the attention of several media outlets.

He was hired by CBS Sports to write online in 2005, but he wasn’t paid for the first year. The following year, he left his law practice to work full-time for CBS. He visited over a dozen football stadiums and documented his experiences in the book “Dixieland Delight.”

Travis later left CBS to become a national columnist for the sports blog Deadspin as well as the sports website FanHouse. In 2011, he launched Outkickthecoverage.com, which grew to become one of the internet’s largest and most visited college football websites.

In 2008, he worked with D1 Sports to prepare for the NFL Draft, and he later wrote about the experience on his blog, Rough Draft. Travis was also the co-host of the 104.5 The Zone radio talk show 3HL. He was also the host of NBC Sports’ national sports radio show.

Travis was hired by Fox Sports in 2014 to host its weekly college football Saturday pregame show. He hosts a daily Periscope and Facebook television show.

Travis interned for U.S. Representative Bob Clement as an undergrad for four years while still at George Washington University. He was hired to work on Al Gore’s presidential campaign in 2001.

Clay Travis was named the “Best Sports Radio Host We Love To Hate” in 2010 by the Nashville Scene. He has hosted a number of television and radio shows, which have been well received by both audiences and critics.

Clay Travis is married to former Tennessee Titans cheerleader Lara. They are the proud parents of three lovely children. He is able to live his life away from the spotlight and is happily married to his wife in Tennessee, USA.

Clay Travis’s Salary and Net Worth

Clay Travis’s net worth is estimated to be more than $6 million as of June 2022. He amassed this enormous fortune through his successful career as a sports journalist, writer, and television analyst.

He has appeared on numerous television and talk shows, and he is the author of several best-selling books. His books include Dixieland Delight: A Football Season on the Road in the Southeastern Conference and Man: The Book. On Rocky Top: A Front-Row Seat to the End of an Era, and Republicans Buy Sneakers Too: How the Left Is Ruining Sports with Politics

Travis is also a well-known host, having hosted numerous award ceremonies, events, and concerts, which contributes significantly to his net worth.

Clay Travis is a well-known television personality in the United States. He’s made a name for himself through his hard work and determination. He is also very active on social media, particularly Twitter, where he has over 650k followers.