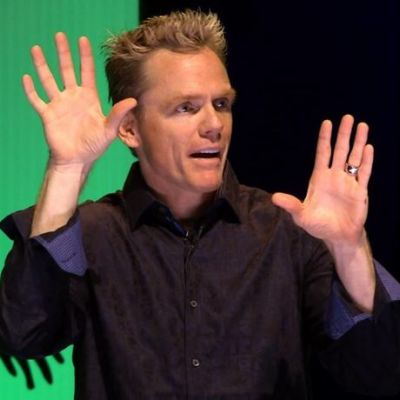 Christopher Titus is a renowned stage comedian whose dark comedy inspired by his not-so-enviable childhood never fails to evoke a cackle.

Christopher Todd Titus was born on October 1, 1964, in Castro Valley, Newark, California, to parents whose frequent bickering over trivial matters led to their divorce when he was still a youngster. His father and mother fought for his custody, but the former won most of the time.

His father’s promiscuity and his mother’s psychotic tendencies would provide the majority of the backdrop for his jokes and comments later on. It’s no wonder that he turned to booze and drugs as a teenager, coming from a shattered, dysfunctional household. He went from tragedy to comedy after falling into a blaze at a beach party and surviving. That’s when he experienced his “aha” moment, in his own words.

Following his epiphany, Christopher went on to build a name for himself in the world of dark comedy. His one-man shows are heavily inspired by his own life.

The sitcom “Titus” became an overnight success, catapulting him to global fame and garnering numerous accolades.

“The Fifth Annual End of the World Tour,” his second concert, was inspired by his 2007 trip to Iraq. It discusses delicate issues such as the Iraq war, pedophilia, and prejudice. It also offers a political critique of George H.W. Bush Jr.’s administration practices. Surprisingly, it also delves into Christopher’s relationship with his late father.

His first divorce and the events leading up to it inspired “Love is Evol.” In other words, he deconstructs his own broken marriage with his first wife and provides remarkable insights into marriage and family life. “This show will either fix or kill your relationship, and you’re welcome in any case,” he says.

“Revolution” is a politico-social examination of the American nation, its infamous present, and its beautiful past. This special is aimed squarely at inmates and “spoiled American brats.”

“Voice in My Head” follows a succession of personal anecdotes, including one about how he used to dress up as Darth Vader for children’s birthday celebrations.

“Angry Pursuit of Happiness” examines numerous world issues and ways to address them. It traverses the entirety of existence in an attempt to unearth deeper truths.

He currently hosts a weekly podcast from “The Combustion Lounge” with his wife Rachel Bradley. Titus frequently begins the show with a rehearsed speech in the manner of a humorous rant called “The Armageddon Update,” which serves as an introduction to the topic of the day. Its slogan is “Never impartial, always unbalanced.”

In addition to critical acclaim for his comedic acts and sitcom, he has received a number of prestigious awards, including the 2017 Festival Award for best comedy feature and the 2017 Jury Prize for best direction.

He was also nominated for an OFTA Television Award for best actor in a new comedy series in 2000, as well as a WGA Award for episodic comedy in 2002.

In 1988, Christopher began dating Erin Carden, whom he married on April 17, 11991. Kennie Marie Titus and Jett Evan Titus were the couple’s two gorgeous daughters. Unfortunately, they split fifteen years later, which inspired his show “Love is Evolve.” Following that, he met another woman named Rachel Bradley. The couple married on August 11, 2013, and they co-host the previously mentioned show.

Christopher Titus’s Salary and Net Worth

Christopher has an estimated net worth of $1 million as of 2022, thanks to his prosperous profession as a successful comedian and actor. He continues to profit from numerous episodes of his hit sitcom Titus.