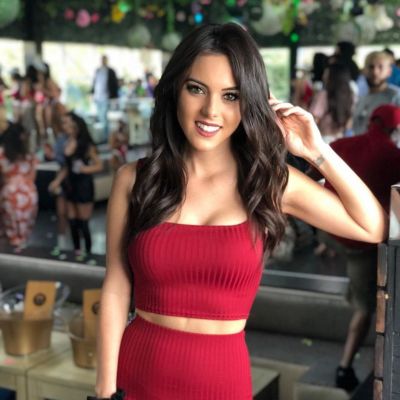 Brooke Bridges is a TikTok celebrity from the United States with over 2 million followers on her popular account. Brooke Bridges also has a YouTube channel with the same name, where she posts vlogs, cosmetic tutorials, and travel videos.

Brooke Bridges will be 31 years old in 2021. She was born on March 7, 1990, in Manvel, Brazoria County, Texas, under the zodiac sign Pisces. Jackie is her mother’s name, and she has a sister named Brittany. She currently resides in Los Angeles, but she longs to return to Texas.

She enjoys traveling a great deal. In one of her YouTube videos, she stated that she got her passion of travel from her mother, who worked as a travel agent. Brooke also enjoys going to concerts. Similarly, she is infatuated with reality shows and watches practically all of them on television.

Her favorite reality program of all time is ‘Big Brother,’ and she hopes to perform on the show eventually. Moreover, AMC’s original series “The Walking Dead” is one of her favorite TV shows. Aside from that, she enjoys watching football, with soccer being her favorite sport. She even has a crush on Cole LaBrant, a social media sensation.

She also adores dolphins but is terrified of spiders. She has been collecting “Hello Kitty” “goodies” since she was a child because she adores the Japanese fictional cartoon character to the core of her being. Warm brownies with vanilla ice cream and mac & cheese with bacon are two of her favorite foods. She also enjoys collecting shoes, and her favorite pair is a pair of ‘Michael Kors’ heels given to her by her mother.Furthermore, she is of American nationality but has not stated her ethnic background. Moving on to her educational history, she may have already graduated from university, but she has not given the name of her educational institution. She is a follower of the Christian faith.

When it comes to Brooke Bridges’ work life, she has built a name for herself through social media platforms. Nonetheless, she began her career at the age of 16 with ‘Radio Disney.’ She committed to working with ‘Radio Disney’ for the next five years. Similarly, she and her friend Selena Montrone previously shared a YouNow broadcast titled Brooke and Selena.

Similarly, in July 2006, she started her self-named ‘YouTube’ channel and posted the first video titled “THE JONAS BROTHERS SING TO ME!!!.” Her debut video is a tremendous hit, with over 418k views. She felt really special while sitting on stage and hearing Jonas Brothers sing for her. Her channel also has a wide range of content, including challenges, tag videos, Q&A, DIYs, hauls, and trip vlogs. She has also included her sister and mother in a handful of her YouTube videos.

Similarly, she has worked on challenge videos with several of her pals. She earlier posted a vlog in which she offered advice on how to deal with the fear of bullying. Despite having been on ‘YouTube’ for a long time, she has only uploaded a few videos. As a result, she has earned 12.9k subscribers to her YouTube channel. However, she is not very active on her YouTube channel and just releases videos once in a while.

She has also created a Tiktok account, where she is quite popular on ‘TikTok’ (formerly’musical.ly’). She is well-known for her lip-sync competition on the app, which has received over 29.6 million hearts to date. Similarly, she has created a ‘YouTube’ video in which she shows her mother learning how to make ‘TikTok’ videos. She appears to be highly active on her Tiktok account, since she posts videos every day. She has, nevertheless, been successful in attracting a million people through her unique and appealing videos.

In terms of Brooke Bridge’s earnings, she is a growing social media figure who has amassed a sizable fortune. She is living a luxury lifestyle and is having a good time. She has not, however, officially disclosed her actual net worth or annual salary. However, according to certain web publications, Polularbio, her net worth is around $20 million. She may also be able to make money from her extra work.

Is Brooke Bridges dating anyone? What is the name of her boyfriend?

Brooke Bridges is now single, according to her relationship status. She is unmarried and has never had a marital affair before. She is currently enjoying her single life and concentrating on her job. As a result, she appears to be quite happy and enthusiastic in her Instagram pictures.

She does, however, continue to publish images with both her male and female acquaintances. But she hasn’t revealed anything about her personal life. Nonetheless, she may be waiting for her ideal match to couple up with. Furthermore, she has not been involved in any contentious acts up to this point and has kept a clean profile.

Brooke Bridges, 30, is a lovely 30-year-old woman with a pleasant and engaging attitude. She is of average height and weighs a healthy amount. Similarly, she has a great body shape, brown hair, and hazel eyes. As a result, she has not revealed her exact height, weight, or physical stats. She has a thin body type and appears to work out to keep her body fit and healthy.

Brooke Bridges is a social media influencer who is active on media platforms such as Instagram and Tiktok. She has over 68.1k followers on Instagram and goes by the handle @brooke bridges.

She does not appear to have a Facebook account, but she has over 3.1k followers on Twitter. Similarly, she has more than 2 million followers on Tiktok under the handle @brooke bridges, with 29.6 million hearts. She has also amassed over 12.8 million subscribers on her YouTube account. For any business queries, she has also provided her email address, [email protected]