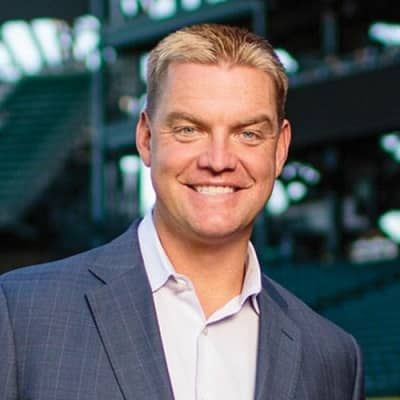 Brock Huard is a former American football player who is currently a FOX NFL game analyst. Damon Huard, Brock Huard’s brother, also played quarterback at the University of Washington before moving on to the NFL.

Brock Anthony Huard, better known as Brock Huard, was born on April 15, 1976, in Seattle, Washington, USA. He is 45 years old and a citizen of the United States. Furthermore, he is an Aries by birth and a MORMON by faith. Mike Huard (father) and Pegg Huard (mother) raised him (mother). In terms of siblings, he has two brothers named Damon Huard and Luke Huard.

In terms of academics, he attended the same high school as his father and brother, Puyallup High School in Puyallup, Washington. After graduating, he enrolled at the University of Washington and majored in psychology.

He joined the 1999 NFL Draft after graduating from high school. Furthermore, the Seattle Seahawks selected him in the third round as the 77th overall pick. He was a backup to Jon Kitna in 2000, when he made his debut against the Dolphins. Brock was traded by the Seattle Seahawks to the Indianapolis Colts in 2002. Furthermore, he served as Peyton Manning’s backup. In 2004, he signed to be the Seahawks’ third-string quarterback, but he missed the whole season due to injury, his final year in the league.

He concluded his NFL career with a passer rating of 60 on 109 attempts for 689 yards, four touchdowns, and two interceptions. Brock and Damon were the first siblings in NFL history to start at quarterback on the same weekend on November 26, 2000. Damon made his Miami Dolphins debut against the Indianapolis Colts, while Brock made his Seattle Seahawks debut against the Denver Broncos.

Careers in broadcasting and analysis

He started his broadcasting career in 2008 with ESPN radio, where he covered college football networks for a decade. He’s also worked in the studio for ESPN, ABC, and the SEC Network, as well as calling games for the same networks.
At the time, he also worked as a color commentator with play-by-play announcer Bob Wischusen. They covered ESPN college football broadcasts in the SEC and Big Ten conferences together.

In 2013, he worked as a color commentator for the Seahawks’ preseason games. In addition, he did play-by-play on KCPQ and KZJO alongside Fox Sports’ Curt Menefee at the time. Before joining Fox Sports in 2019, he served as an announcer for ESPN Pop Warner football specials live from Disney’s Wide World of Sports. He presently co-hosts the Brock and Salk program on KIRO-AM, a sports radio debate show, with co-host Mike Salk. Their Brock and Salk Show previously aired on ESPN 710 Seattle, but it wasn’t until late September 2019 that it was converted to a podcast. His most recent endeavor was a charity signing with UW Husky Football for Seattle Children’s COVID-19 Relief, which he completed alongside his brother.

Brock Huard has yet to acquire any big accolades or recognition. We may expect Brock to win several of them in the next years.

In terms of net worth, he is projected to be worth approximately $6 million, with an annual salary of $39,910 as a broadcaster.

Brock Huard is married to former basketball star Molly Hills. They originally met at the University of Washington and immediately fell in love. The couple has three children: two daughters named Haley and Macey, and a male with no name. His two daughters are both professional basketball players.

As of today, Brock Huard is not involved in any scandal or speculations, and he is solely focused on his work.