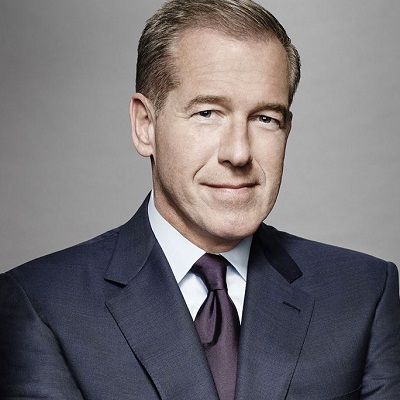 Brian Williams, a journalist and pundit, was born on May 5, 1959. He was born in the New Jersey town of Ridgewood. He is currently 62 years old and belongs to the Tauras zodiac sign. Dorothy May and Gordon Lewis Williams were his parents. He is an American citizen. Brian Douglas Williams is also his birth name.

He served as executive vice president of the National Retail Merchants Association as well. His mother used to be a theatrical actress in her spare time. Williams has four brothers and sisters. He is the youngest of the group. Furthermore, he is an American citizen with Irish, Swedish, and German ancestry.

He is also a native of both New York and New Jersey, however he currently resides in Connecticut. He also served as a volunteer firefighter in New Jersey for several years. He also shares his name with Brian Williams, a long-time Canadian sportscaster.

In a segment taped while they were both in Vancouver for the 2010 Olympics, Canadian Williams stated that they had previously exchanged emails but had never met in person. They went to each other’s sets and taped fake introductions:

They exchanged gifts as well. NBC’s Williams gifted Canada’s Williams with a jacket bearing his show’s emblem — as well as his “own” name.

Brian Williams attended Mater Dei High School and graduated with honors. New Monmouth (Middletown), New Jersey is a Roman Catholic high school in the New Monmouth neighborhood of Middletown. Williams spent three years as a volunteer firefighter with the Middletown Township Fire Department. During high school, he was also the editorial editor of the school newspaper.

He had an injury while playing football, which resulted in his crooked nose. After high school, Brian Williams attended Brookdale Community College. He went on to The Catholic University of America and then George Washington University after that. Instead of graduating, he worked as an intern in President Jimmy Carter’s administration. After a while, he began to think of dropping out of college as one of his “biggest regrets.” In May 1998, he was awarded an honorary doctorate from Elmira College.

William’s first job was working as a busboy at Perkins Pancake House. In 1981, he started his career in broadcasting at KOAM-TV in Pittsburg, Kansas. After 12 years in local reporting, the skilled correspondent joined NBC News in 1993. He was the host of the national Weekend Nightly News for many years. He was also the White House correspondent in chief. After working at KOAM-TV in Pittsburgh, Kansas, he went on to work as a journalist and anchor at stations in New York, Philadelphia, and Washington, DC.

In the summer of 1996, he began working as an anchor and managing editor for MSNBC and CNBC’s The News with Brian Williams. On The NBC Nightly News with Tom Brokaw, he also served as a major replacement anchor for Tom Brokaw. He was also the Weekend anchor for the news program. He began broadcasting on WCBS in New York City in early 1987.

The news of two disasters in his first year caught his attention: the Asian tsunami and Hurricane Katrina. His NBC Nightly News coverage of Hurricane Katrina was widely praised “for venting his anger and frustration over the government’s failure to act quickly to help the victims.” He also received a Peabody Award for it, “the Peabody committee along with the entire staff of NBC Nightly News demonstrated the highest levels of journalistic greatness in reporting on Hurricane Katrina.”

For Katrina, his work was described as “Murrow-worthy,” and it was also stated that he embellished “a nation’s anchor” throughout the hurricane. The New York Times described his hurricane reporting as “a landmark moment.”

On October 4, 2011, he was recognized for his work as a Rock Center anchor with Brian Williams. Instead of the canceled drama series The Playboy Club, the show launched in a newsmagazine program on October 31, 2011, at 10:00 p.m. Eastern.

However, on May 10, 2013, NBC canceled his show owing to low ratings; the network was having problems finding a stable time slot for the show. His last episode aired on June 21, 2013, and he was apparently “insulted” by the cancellation of the programme.

Williams returned to the airwaves in 2015 as MSNBC’s top anchor. He was involved in major stories such as Pope Francis’ visit to the United States, the shooting at Umpqua Community College, and terrorist incidents in Paris, San Bernardino, Belgium, and Nice.

He also became the Chief Elections Anchor for MSNBC in January 2016, and he made his debut in the new capacity during coverage of the 2016 Iowa Caucuses. As part of his duties as MSNBC’s top anchor, the reporter hosts a nightly news and politics wrap-up show called “The 11th Hour with Brian Williams.”

In 2007, Brian Williams was a frequent celebrity guest on The Daily Show. He also made an appearance on Sesame Street in the same year’s episode. On the other hand, he was a regular on Jimmy Fallon’s Late Night show. He made regular guest appearances on NBC’s television comedy 30 Rock as a caricatured version of himself.

The 60-year-old broadcaster also contributed to the Backpack Books Encyclopedia of World History, which was published in 2003. He has contributed by writing for The New York Times and Time magazine, among other media.

In 2007, Time magazine named Brian Williams one of the world’s 100 most influential people. He was also honored by Arizona State University with the Walter Cronkite Awards for Excellence in Journalism. He had previously been honored as “Father of the Year” by the National Fathers’ Day Committee in 1996.

He also won the Nightly News prize for his coverage of a fatal sequence of tornadoes in Oklahoma, which also earned him the DuPont-Columbia University Award. For an interview show on Rock Center in 2012, he won an Emmy. He also won an Emmy in 2013 for his work on a documentary about the John F. Kennedy Presidential Library and Museum as an executive producer and editor.

Finally, he was nominated for an Emmy in 2014 for an NBC News documentary about the Boston Marathon bombing. Brian Willams was also inducted into the Arts and Letters Category of the 2014 New Jersey Hall of Fame.

Brian Williams’ estimated net worth is $40 million. He is one of the highest-paid journalists in the country. According to the most recent source, the journalist earns a $10 million annual compensation from his successful reporting career with NBC.

Brian Williams is a husband and father. On June 7, 1986, he married Jane Stoddard Williams, the joy of his life. The ceremony took place at New Canaan, Connecticut’s First Presbyterian Church.

Douglas Williams and Allison Williams are the couple’s two children. Allison is a musician as well as an actress. Douglas is the host of SportsNet New York’s Geico SportsNite.

The National Father’s Day Committee named Brian “Father of the Year” in 1996.

An Iraqi war helicopter was shot down.

In February 2015, the reporter was suspended for six months. Deborah Turness, the president of NBC News, has been suspended from Nightly News for six months without pay for misrepresenting the Iraq event.
He did so because he lied about his experiences during the 2003 invasion of Iraq. During Katrina, the anchorperson made an inexplicable reference to a suicide that occurred within the New Orleans Superdome.

He later apologized and retracted his disproven Iraq War tale in 2015. As a result, on June 19, 2015, the debate came to a close. In an interview with Matt Lauer on the Today Show, he apologized once more and discussed his future position in the news.

He is 6 feet tall and weighs 103 kg, according to his body measurements. His hair is bleached blonde, and his eyes are hazel. However, no additional information on physical measurements is provided.

Williams also underwent knee replacement surgery in August 2013. He publicized the news publicly on multiple occasions and discussed the operation on several talk shows, including his appearance on Late Show with David Letterman on October 3, 2013, which aired on the rival CBS network since 1993.