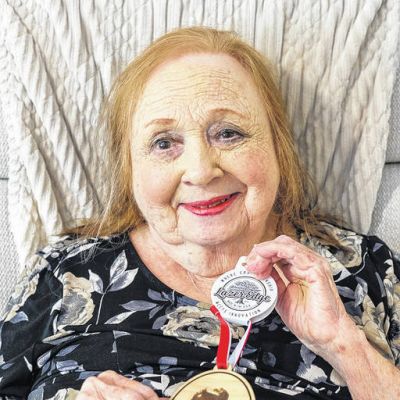 Elizabeth Ann Theresa “Betty,” also known professionally as Betty Lynn, is a former American actress. She is best known for her role as Deputy Barney Fife’s girlfriend, “Thelma Lou,” on The Andy Griffith Show. Betty appeared in several films between the 1940s and 1950s, including “Sitting Pretty” (in 1948), “June Bride” (in 1948), “the original Cheaper by the Dozen” (in 1950), and “Meet Me in Las Vegas” (in 1956).

Betty Lynn was born in Kansas City, Missouri, and raised there. Her family is involved in the film and music industries. Her mother, Elizabeth Ann Lynn, was a “renowned mezzo-soprano” who taught her to sing as a child. Betty received music training at the Kansas City Conservatory of Music.

Unfortunately, she spent her childhood without her father. This was due to a rift between her parents. Betty’s father once threatened to shoot her in the abdomen during her pregnancy. Lynn’s mother spent her days in a locked room with the baby after her birth because they were constantly in danger of being killed. When she was five years old, her mother and father divorced. Betty’s grandfather, George Andrew Lynn, worked as a railroad engineer and provided for her family like a father.

Betty Lynn began her acting career as a member of a drama series that aired on one of Kansas City’s radio stations. After a few years of hard work, she began to receive relevant acting roles, which boosted her career. She appeared in Walk with Music (1940), Oklahoma! (1943), and Park Avenue (1945). (released in 1946).

Darryl F. Zanuck signed Betty for a 20th Century Fox film after being impressed by her performance. It was a significant break in her career that contributed significantly to her success. According to the contract, the production company will continue to drop her every six months. As a result, Betty was given recurring acting roles in the production. Because it was a well-known production, she worked hard to keep getting roles and remained associated with them for a long time.

Betty had the opportunity to work in films in addition to the small screen. Her first break came in the 1948 film “Sitting Pretty.” She had won a “Photoplay Gold Medal” for this film.

For her outstanding performance, she was cast in the CBS comedy series The Egg and I (1951-1952) in place of Patricia Kirkland, who had previously played the role. She later appeared in the comedy film “Love That Jill” (in 1958).

She reprised her role as “Thelma Lou” in the reunion film “Return to Mayberry” in 1986. Betty retired from acting in 2006.

Betty auditioned at the age of seventeen to be a part of USO (United Service Organizations) entertainment. After a year, she began touring (under the auspices of the USO) to theaters in countries such as Burma, India, and China. During her tour, she visited patients in hospitals and sang for them from her collection of 725 songs on their requests.

During her tour, she had the opportunity to meet recently released Rangoon war prisoners. The doctor predicted that she would lose her senses soon. Music was one of the most effective therapies for healing them. Betty was doing admirable work to look after their mental health. Betty was inducted into the “Missouri Walk of Fame” in Marshfield, Missouri, in 2007.

On August 30, 2016, she was awarded the “Order of the Long Leaf Pine,” the highest civilian honor in North Carolina. North Carolina Governor Pat McCrory and Lieutenant Governor Dan Forest presented this honor.

Betty has never married and has chosen to remain single her entire life, according to her personal life. According to reports, she was once engaged, but the relationship did not end in marriage due to a variety of factors. She has also never been in a relationship since then. Betty bought a house in Los Angeles in 1950 and moved in with her grandparents and mother. She is the one who is in charge of looking after her family. She serves as both a breadwinner and a caregiver.

Betty is a warm-hearted person who takes the time to meet her followers and exceed their expectations. She does this by stopping by the Andy Griffith Museum in Mount Airy, North Carolina, once a month to meet her fans and sign autographs. Betty Lynn is currently residing in a Mount Airy assisted-living facility.

Betty Lynn’s Salary and Net Worth

Betty has had a very successful acting career. She has worked in a number of television shows and films, earning her a lot of respect and money. Her primary source of income is acting.

Betty has also appeared as a guest star in several TV shows, including The Gale Storm Show, Schlitz Playhouse of Stars, Markham, and Sugarfoot. She also had the opportunity to play Thelma Lou on “The Andy Griffith Show,” where she appeared in 26 episodes.

She appeared in a number of shows, including “Mother Is a Freshman,” “Cheaper by the Dozen,” “Payment on Demand,” “Love That Jill,” “The Egg and I,” “Walk with Music,” “Oklahoma!” and “Park Avenue.” She’d made a lot of money from these parts. As of July 2022, her total net worth is estimated to be $3 million.