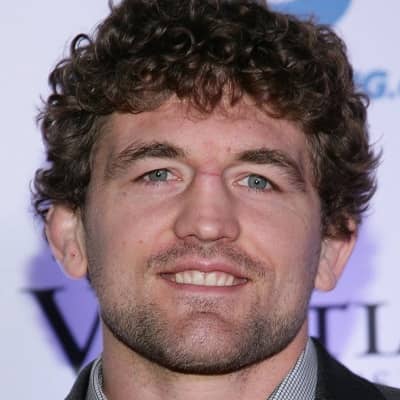 Ben Askren is also an accomplished MMA fighter, having won the Bellator and ONE Welterweight Championships.

Benjamin Michael Askren, better known as Ben Askren, was born on July 18, 1984, in Cedar Rapids, Iowa, USA. He is currently 37 years old and a citizen of the United States. Furthermore, his nickname is Funky, and his zodiac sign is Cancer.

He is also the son of Chuck Askren (father) and Michele Askren (mother). When it comes to siblings, he has a brother named Max Askren. Furthermore, his brother Max is a wrestler who won a national title in 2010.

In terms of academics, he attended Arrowhead High School, where he finished his high school education. In high school, he was a two-time state wrestling champion. He then attended the University of Missouri.

Ben Askren stands 5 feet 10 inches tall and weighs around 77 kg. Furthermore, he has blue eyes and dark brown hair. Aside from that, no more information on Ben’s physical measurements is known.

He began his professional wrestling career after graduating from college. As a university amateur wrestler, he competed in the 174-pound weight class during his collegiate wrestling career. He won the National Collegiate Athletic Association Championship match in 2006 and 2007, following successive losses in the same tournament in 2004 and 2005. He is still the NCAA single-season pin record holder.

At the time, he was recognized for his distinct ‘funky’ wrestling style and pinning abilities. Ben concluded his NCAA wrestling career with a 153-8 record and an unprecedented 87-match victory streak. Ben’s only two opponents throughout his four years at Missouri were Chris Pendleton of Oklahoma State and Ryan Lange of Purdue. He overcame national runner-up Tyrone Lewis in the US Olympic Trials to secure a berth in the 2008 Summer Olympics.

He also won his first bout in the 74 kg weight division. To revenge for his Olympic loss, he defeated Cuba’s Fundora in the quarterfinals of the Cerro Pelado International in 2010. In addition, he competed in the Agon Wrestling Championships and the Flo Premier League.

After the Olympics, he resumed combat training at the American Top Team’s main facility in Florida. On February 7, 2009, he made his professional MMA debut in Columbia, beating Josh Flowers. Following that, he defeated Mitchell Harris at Patriot Act 2 in Columbia.

In 2009, he fought in the ADCC Submission Wrestling World Championship in Barcelona. He then won gold in the 84 kg class in the 2009 FILA 2o World Grappling Championship. He signed a two-year/six-fight contract with ONE Championship. In 2014, he fought ONE champion Nobutatsu Suzuki to capture the ONE Welterweight Title at ONE FC: Reign of Champions.

He quit the organization in 2017 and joined UFC in 2018. In March 2019, he defeated Robbie Lawler in the UFC 235 main event. In October 2019, he was defeated by MMA veteran Demian Maia at UFC Fight of the Night. The next month, he declared his retirement from MMA. Aside from MMA and wrestling, he also competed in disc golf.

He won the Mighty MO Advanced, St. Louis Open Advanced, First Class Challenge, and PDGA Amateur World Doubles Championships Advanced in 2009. After retiring, he heads the Askren Wrestling Academy, which he co-founded with his brother Max in 2011. FloWrestling Radio Live, The Funky & FRB Show, and The T-Row & Funky Show are among the podcasts he co-hosts.

He’s also the host of the RUDIS Wrestling Podcast. He has invested in bitcoin and backed companies such as Dollamur Sport, My Bookie, and Reebok. He made his pro boxing debut in 2021 against Jake Paul, an Internet celebrity and professional boxer. Furthermore, Paul knocked him out in the first round.

Ben Askren married Amy Askren in front of their family and friends on April 9, 2010. The couple has three children: one son and two unnamed daughters. As of now, the former fighter is not involved in any scandal or speculations and is concentrating on his career.