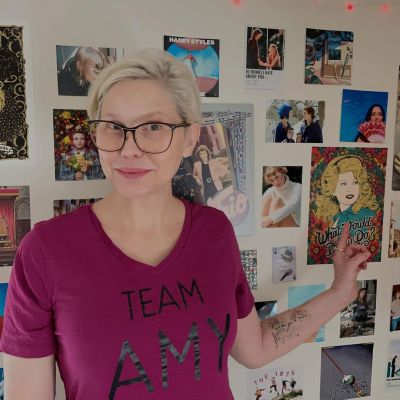 Amy S. Foster is a well-known American poet and songwriter. Amy S. Foster is best known for her songs Home, Anything, and Hold On. She was also nominated for a Juno Award in the category of Songwriter of the Year.

Amy Skylark Foster, 47, was born on July 29, 1973, in Los Angeles, California, USA. Her father’s name is David Foster, and her mother’s name is Bonnie Jean (B. J.) Cook. Amy is a half-sister to Allison Jones Foster, Erin Foster, Sara Foster, and Jordan Foster, and she is of Caucasian descent. She also attended American University for her education.

She will also be 41 years old in 2021. Her astrological sign is Leo. She now lives in Portland, Oregon.

Amy S. Foster has worked with Andrea Bocelli, Destiny’s Child, Solange Knowles, Eric Benet, and many other artists. She was also a member of the band Wilshire when she co-founded QOINS. Her co-written songs include Home, Anything, Hold Tight, Just Haven’t Seen You Yet, To Be Loved, and Beautiful Day. She primarily worked with Michael Bublé to provide her fans with the best creations.

Her first book was published as an author in 2009. The novel’s title was When Autumn Leaves, and it received positive reviews from critics. She also plans to release 14 sequels to her novel.

Her net worth is currently estimated to be in the $500k range. Her income and other earnings, however, remain unknown. In addition, her father’s net worth exceeds $150 million.

She avoids gossip and is not engulfed in desperate controversies. She did, however, have a mastectomy surgery in June 2019 to cure her early-stage breast cancer.

She is also active on social media. On Instagram, she has over 6.8k followers and 672 on Facebook. She maintains a sizable following on Twitter, where she has over 3000 followers.