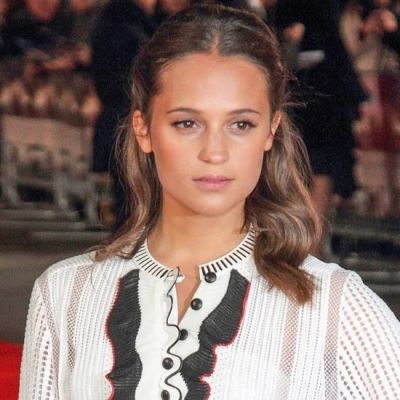 Alicia Amanda Vikander was born to psychiatrist Svante Vikander and stage actress Maria Fahl Vikander. Her birthday is October 3rd, 1988, and she was born in Gothenburg, Sweden.

Alicia Vikander, a proud Swedish actress, is a well-known face of the film industry, having worked in it since 2002. She began acting as a child theater artist, and her professional acting career began when she did her first short film and series. Alicia Vikander is also a trained ballet dancer who attended the Royal Swedish Ballet School. She became well-known around the world when she portrayed Vera Britain in ‘Testament of Youth.’ She has been nominated for many prestigious awards for her effortless acting skills and contribution to the entertainment industry, and she has won many of them.

Alicia Vikander is of Swedish descent and has Swedish nationality. She is of white descent. Aside from that, she is 5 feet 6 inches (1.66m/166cm) tall and weighs around 53 kg (117lbs). Her body measurements are 34-24-35 inches, with a slim body type. Furthermore, she has dark brown hair and brown eyes.

In 2006, Alicia Vikander began her professional film career by appearing in short films. She worked on short films for three years before making her feature film debut as Katarina in the 2010 film ‘Pure.’ The following year, she made another short film and a feature film called ‘Jeu de Cheyennes and The Crown Jewels. In 2012, she played Caroline Matilda of Great Britain in the Danish historical drama film ‘A Royal Affair.’ She later appeared in films such as ‘Anna Karenina as Kitty in 2012, ‘The Fifth Estate,’ and ‘Hotell’ in 2013. The following year, she starred in the American fantasy film ‘Seventh Son,’ in which she played Alice Deane. In 2015, Alicia rose to prominence as Vera Brittain in the British drama film ‘Testament of Youth,’ which was based on the First World War.

She shared the screen with Kit Harington and Emily Watson in this scene. Similarly, her 2015 schedule was jam-packed with eight films, including ‘Ex Machina,’ ‘Ingrid Bergman: In Her Own Words,’ ‘The Man from U.N.C.L.E,’ ‘The Danish Girl,’ ‘Burnt,’ and ‘The Magic Diner.’ In the years since she has mostly acted in short films and has also worked as a producer. In 2017, she appeared in two animated films, one as Huppu in ‘Birds Like Us and another as Little My in ‘Moomins and the Winter Wonderland.’ She also appeared in films such as ‘Tulip Fever,’ ‘Submergence,’ and ‘Euphoria,’ and worked as a producer in ‘Euphoria’ the same year. ‘Tomb Raider,’ ‘Anthropocene: The Human Epoch,’ ‘I Am Easy to Find,’ ‘Earthquake Bird,’ and ‘The Glorias’ were her films from 2018 to 2020. ‘The Green Knight,’ ‘Tomb Raider 2’ and ‘Blue Bayou’ are among her upcoming films.

Alicia Vikander Income And Net Worth

Alicia Vikander is a well-known face and one of the most talented and successful actors in the film industry. The net worth is expected to be $5 million by 2020.

When she was seven years old, Alicia Vikander began performing on stage as a child artist. Her first stage appearance was in the play ‘Kristina fun Duvemla’ at The Göteborg Opera. She also studied ballet at the Royal Swedish Ballet School when she was nine years old but was unable to continue due to fractures and injuries. She has completed high school.