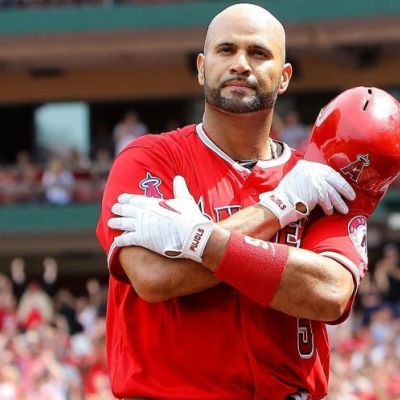 Albert Pujols is a well-known professional baseball player who has played for the ‘Los Angeles Angels and the ‘St. Louis Cardinals.

Albert was raised primarily by his grandmother in Santo Domingo. He comes from a large family with ten uncles and aunts. Albert is his mother and father’s only child. He was born to softball pitcher Bienvenido Pujols (father). He had a bad habit of drinking. Albert frequently drove his father home after getting drunk. As he grew older, he began to play baseball with limes as balls and a milk carton as a glove. Albert, his father, and his grandmother moved to Washington Heights, New York City, in 1996. They relocated to Independence, Missouri, after two months to join a few relatives.

He became the youngest player in NL history to win the batting title in 2003. He also received his first ‘Sporting News Player of the Year Award,’ as well as his second ‘Silver Slugger Award.’

Albert signed a $100 million contract with the St. Louis Cardinals in 2004. He was the first player to receive the Fielding Bible Award for his “first base” position in 2006.

Albert Pujols’s Income And Net Worth

Albert is a Dominican-American baseball player for the Los Angeles Angels of Anaheim. He has received numerous prestigious awards, including All-Star and Most Valuable Player. He made his tenth All-Star appearance with the Angels in 2015. His net worth was estimated to be around $200 million as of August 2022.

On January 1, 2000, Albert married Deidre. The couple has five children Isabella (an earlier relationship’s daughter), Sophia, Esther Grace, Ezra, and Albert Jr. The family lives in St. Louis during the offseason. Isabella was born with Down syndrome. Albert and Deidre are advocates for those born with this condition. He became a US citizen in 2007 after passing his citizenship test with a perfect score of 100.