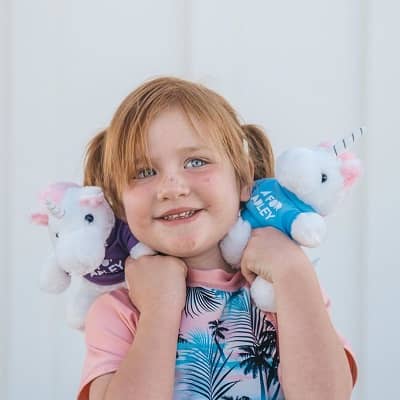 Adley McBride is a five-year-old girl who was born on August 6, 2015. Her zodiac sign is Leo, and she is from Utah, USA. Adley May McBride is also her full name. Jenny McBride, her mother, and Shaun McBride, her father, make up her family. Her parents are both social media celebrities, with her father’s online moniker “Shonduras” being the most well-known.

Adley also has a younger brother named Niko Bear McBride. On their “Shonduras” Youtube channel, all of the family members appear. Adley McBride has graduated from pre-school as of mid-May 2020, despite his tender age.

Adley also enjoys swimming, pretending, playing with toys, and anything things related to unicorns and mermaids. Adley does her hardest to make every day with her friends and family the happiest day ever. Similarly, she enjoys coming up with creative video ideas and then filming them with Mom and Dad, as well as her younger brother Niko Bear.

Adley has also appeared in films such as “Baby Trapped Inside Airplane for 6 Hours!!” and “Baby Gets WAY Excited!!” on her father’s YouTube channel “Shonduras.” Her family also has a number of wiener dogs, who are frequently highlighted on her father’s social media pages.

Profession of the Family

Adley’s mother Jenny is a part-time Ultrasound technician who also appears frequently on the family YouTube channel “Shonduras” as part of the “Best Day Ever” series. Jenny also graduated with a degree in radiography after playing competitive softball for Weber State University.

Jenny is also an accomplished snowboarder who enjoys pranking and scaring her spouse and friends. Adley’s family has spent time with Ellie Mecham from the “Jared and Ellie” YouTube channel, as well as Casey Neistat and Devin Supertramp, among others, as a Youtube sensation.

Furthermore, Adley’s father is known as “Shonduras,” and he rose to stardom through Snapchat. Later on, he began to use YouTube. Shaun is well known for his finger paintings on Snapchat. Shaun’s YouTube channel reached one million followers on March 12, 2017.

Shonduras also uses the Snapchat app to create fascinating stories and beautiful pieces of art. On the aforementioned photo-sharing app, as well as on Twitter, he has excellent relationships with his supporters. Adley’s father was also honored at the 2016 Streamy Awards with the “Snapchat Storyteller” award.

Shaun was also a professional skateboarder who loves traveling and trying new things. He is also the founder of Spacestation Gaming, an esports organization. This is how Shaun streams video games. Along with his wife and family, he also creates daily adventure videos on the YouTube channel “Shonduras.” Shaun was then selected as one of the highlighted Snapchat Storytellers in 2018 as part of a product designed to connect advertisers with content creators.

Adley’s social media accounts are managed by her parents on Instagram and YouTube. On October 5, 2017, her parents launched her YouTube channel, “A for Adley – Learning & Fun.” As of August 2020, she had racked up over 2.3 billion views and 2.18 million subscribers since then.

On Instagram, she goes by the handle @adleymcbride, with 296 post shares and 55.4k followers at the time of writing this biography. For further information, we can reach out to her at [email protected]

Moving on, her net worth is estimated to be over $19 million. She has over 300 videos on her channel, with a total of over 2.3 billion views. Every month, she produces 13 new videos, resulting in 13 million video views and 8.2k new subscribers. She has amassed a great deal of fame and fortune at a very young age.