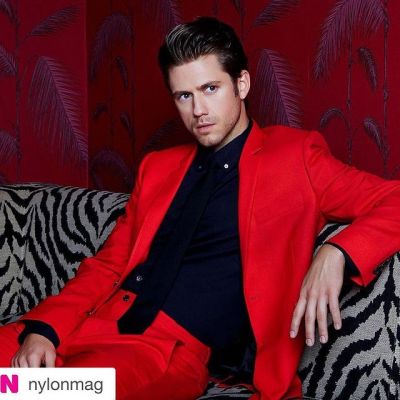 Aaron Tveit is an actor and singer. He was born on October 21, 1983, in Middletown, Orange County, New York.

Aaron Tveit is a 36-year-old actor. He was born in Middletown, Orange County, New York, on October 21, 1983. Posie Tveit is his mother’s name, and Stanley Tveit is his father’s. Jon, his five-year-younger brother, is his only sibling. He is a Catholic priest in the New York Archdiocese.

In terms of his schooling, he graduated from Middletown High School in 2001. He was a member of the chorus and participated in sports such as golf, soccer, and basketball. Aaron was in four different theater productions at his school. He also played the violin and French horn as a child.

He also declined business school scholarships to pursue a vocal performance degree at Ithaca College. His parents backed him up in his decision until he switched to musical theater after his first year because he missed acting and theater.

When it comes to Aaron Tveit’s professional life, he has had a remarkable and varied career on stage and on television. In 2003, he entered the national tour of Rent as Steve, his first acting role.

He played Frank Abagnale Jr. in Catch Me If You Can in the summer of 2009. He also played Roger in the Hollywood Bowl production of Rent in August 2010. Aaron was nominated for the Drama League Award for Distinguished Performance, the Outer Critics Circle Award for Outstanding Actor in a Musical, and the Fred Astaire Award for Best Male Dancer on Broadway for his role as Frank Abagnale Jr.

He took a break from Broadway after Catch Me If You Can. Then, in 2012, he had a significant breakthrough role as groundbreaking Enjolras in the film adaptation of Les Miserables, which was a fan favorite. Hugh Jackman, Eddie Redmayne, Samantha Barks, Helena Bonham Carter, Sacha Baron Cohen, Russell Crowe, Anne Hathaway, Amanda Seyfried, among others appeared in Les Miserables. His appearance alongside the cast at the 85th Academy Awards ceremony was inspired by the film.

Graceland, a USA Network television series, featured him in June 2013. This show aired for three seasons before being canceled in October 2015. In November 2014, he made his West End debut as John Wilkes Booth in the play Assassins. On January 31, 2016, he made his debut in Grease Live, a televised live production of the musical Grease, which premiered on Fox. He played the lead in the film and was also featured on the Grease Live soundtrack, which was released the same year.

Following the conclusion of Graceland, he went on to star in a number of other television and film projects. Similarly, he starred alongside Mary Elizabeth Winstead in CBS’s summer series BrainDead, which premiered on June 13, 2016. On October 17, 2016, the show ended after one season. Then, in 2017, he had time to perform more concerts, reprise his appearance from The Good Wife on an episode of The Good Fight, and star in the independent film Created Equal.

In November 2017, he worked as a Christian in a production lab for the stage adaptation of the 2001 film Moulin Rouge. He revealed in April 2018 that he would reprise his role in the world premiere of Moulin Rouge! At Boston’s Emerson Colonial Theatre. He had a recurring appearance as aspiring politician Matt Dobbins on the CBS show The Code in the Boston and Broadway versions of Moulin Rouge! in 2019.

Similarly, he played Christian in the Al Hirschfeld Theatre’s Broadway production of Moulin Rouge!, which opened on June 28, 2019. On July 25, the show had its opening night. However, due to the Covid-19 pandemic, development was placed on hold starting March 12, 2020.

He also hosted the 2016 Stockings with Care Benefit Gala at the Bowery Hotel Ballroom and his acting work. The following group sends holiday greetings to families who are homeless or enrolled in assistance programs. In the spring of 2017, he teamed up with The First Tee. In addition, he is an enthusiastic golfer.

Talented and dedicated Aaron Tveit has been nominated for a number of awards and has won nominations for his roles. He also received the Lucille Lortel Award for Outstanding Featured Actor for this role. The Helen Hayes Award for Outstanding Supporting Actor in a Non-Resident Production was given to him in 2009. He received the Clarence Derwent Award from the Actors’ Equity Association for his performance as Gabe.

Aaron has won numerous awards and performed in the role during his television, film, and theatre career. He has won several awards, including the San Diego Film Critics Society Award, the 17th Satellite Award, the Washington D.C. Area Film Critics Association Award, the National Board of Review Award, the Lucille Lortel Awards, the Critics’ Choice Award, the Screen Actors Guild Award, the Helen Hayes Award, among others.

In 2017, he was nominated for MTV Movie & TV Awards for Best Musical Moment for Grease Live! and Best Actor for his role in Created Equal.

Aaron Tveit’s net worth is unknown, but he is a well-known actor who has amassed a sizable fortune throughout his acting career. The film industry is his primary source of profit. His net worth is estimated to be around $5 million. Similarly, he is one of Hollywood’s most attractive guys, having appeared in a variety of films and television shows and earning an annual salary of about $51k. With his great wealth, he lives a luxurious lifestyle.

What is Aaron Tveit’s relationship status?

In terms of his previous relationships, he married musical theater actress Jacqui Polk from 2005 to 2007. He currently has no girlfriend and does not go out publicly with many women. He seems reserved when it comes to relationships, so he doesn’t have many.

Aaron Tveit is active on social media sites such as Instagram, Twitter, and others. He doesn’t seem to have a Facebook profile. He has amassed a sizable fan base. On Instagram, he uses the username @aarontveit, which has 329k followers; on Twitter, he has over 104.7k followers.